The gist of IFC’s breakfast news conference this morning was to announce the availability of day-and-date video on demand and festival premieres. There was also an announcement of a partnership with South by Southwest. Steven Soderbergh attended, partly to talk about Che going into video-on-demand and partly to discuss the basic viewing landscape out there. Here‘s part of what he said. 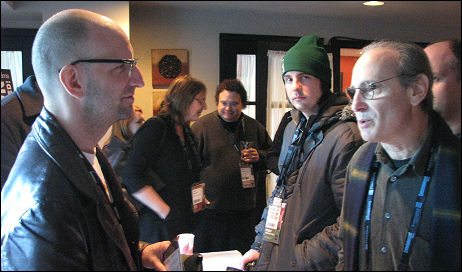 I received an email yesterday (or was it Saturday?) saying that Taking Chance director Ross Katz wanted to sit down and dispute my 40% positive, 60% negative review of his film and explain how I’d misunderstood it. I wrote back to say “cool, let’s do it, I’m game.” I respect any filmmaker who stands up and argues back. But that was the end of it from his end.

“You should really check out Don’t Let Me Drown at Sundance,” a guy just wrote me. “It’s by far the best movie here,” he said. How does he know that, and what dies “best” mean? I’ve heard good recommends from two others, but not along the lines of it being the mother of all 2009 Sundance flicks. I’m catching the press and industry screening at 6 pm — an hour from now.

You can’t do the kind of column I usually do (seven or eight stories daily, if not more) and see three films daily plus attend a social function at day’s end and get five or six hours in the sack — it just doesn’t work. One or the other has to suffer. And these eighteen-hour days wear you down after four or five days. Not so much physically as emotionally, psychologically.

It’s right around this time during Sundance — middle of the fifth day, three nights and two days to go — that the sum total of all the films you’ve missed and are likely to miss come crashing down upon you. And you begin to feel almost paralyzed. And if that isn’t enough to make you want to reach for medication, there’s also knowing that you’re not posting enough. (I’ve experienced or have been told about several intriguing things since last Thursday morning, and written about none of them.) On top of which is the presumption that HE’s Sundance readership tends to be a bit less because people don’t kow the movies, don’t relate, etc.

I’ll snap out of my funk before long. The process has already begun by writing this item.

A guy just wrote me about this 500 Days of Summer trailer and asked what I thought of the finished film. I’ve had two chances to see it, I told him, but I’ve wound up doing other things because of my Joseph Gordon-Levitt problem, which is fairly severe. I don’t want to get hung up on this, but his internally mannered acting style bugs the hell out of me. It began with Brick and intensified with The Lookout. For me, I mean. 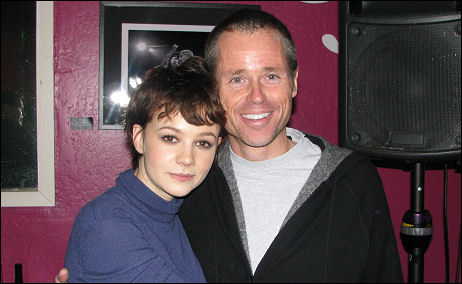 A lot of people said “Gump!” when Benjamin Button was first screened. This video is for those astute minds who initially waved the comparison off.

The tone of Glenn Ficarra and John Requa‘s I Love You Phillip Morris is hard to describe. It’s a kind of dark comedy (i.e., there are bits that are intended to draw laughter), but since it’s a tale of obsessive gay loony love there’s really not that much to “laugh” at. But there’s conviction in it — the emotions are as real as it gets — and the performances by Jim Carrey and Ewan McGregor as the lovers are intense and out-there and fully grounded. Nobody’s putting anyone on, I mean. 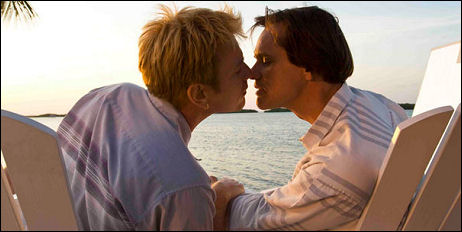 The tone is somewhere between high-toned soap opera and hyper-real absurdism, but it’s more or less fact-based. And the things that make it respectable and worthy and bold (which I feel it definitely is) are the sad moments, the irrational I-love-you acts, the bad behavior, the hurt. It’s nuts, this movie, and that’s what I liked about it. Love is strange, silly, demeaning, glorious, heartbreaking. A drug and a tidal wave that can destroy as easily as restore. And I Love You Phillip Morris is not laughing at this. At all. It’s a movie with balls and dicks and loads of heart and soul.

I have to go to the breakfast being hosted by IFC Films for Steven Soderbergh (which starts in half an hour). I can get into Phillip Morris a bit more this afternoon.

I like this line from the Sundance notes: “As a primer on the irresistible power of a man who is either insane or in love (is there a difference?), I Love You Phillip Morris surely serves to remind us of the resilience of the human spirit.”

Longtime writing partners Ficarra and Requa are making their directing debut with this. It’s based based on the true-life tale of Steve Russell (Carrey), a onetime married police officer turned gay Texan con man, and his passionate love he shares with “blonde southern queer” named Phillip Morris (McGregor) whom he meets in prison, where he’s been sent for credit card fraud.

Carrey’s website says that “after reading the script, he immediately signed to do the movie, explaining that there have been only three scripts that he truly felt compelled to do — The Truman Show, Eternal Sunshine of the Spotless Mind and this.

“The film had a very low budget, estimated to be just $14 million,” it reads. “It was initially to be directed by Gus Van Sant (Good Will Hunting), but he dropped out to make Milk. So Carrey agreed to let Ficarra and Requa direct. The financing is from director Luc Besson’s EuropaCorp. The filmmakers hope to sell domestic rights at the Sundance Film Festival.” 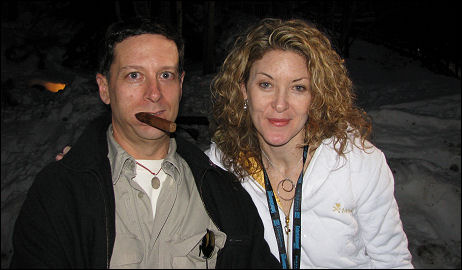 We Live In Public star/subject Josh Harris (looking much slimmer than he does in the film) and director/producer/editor Ondi Timmoner outside Variety party — 1.18.09, 6:05 pm. 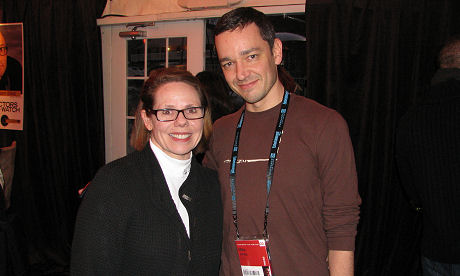