“Have you noticed that war is the only chance that a man gets to do something redeeming?,” playwright/screenwriter Paddy Chayefsky wrote some 45 years ago. “That’s why war is so attractive. Brave men die in battle, but in peacetime they’re just normal cowards. Frightened of their wives, trembling before their bosses, terrified at the passing of the years. But war makes them gallant. It makes them self-sacrificing and generous instead of greedy and selfish. War isn’t hell at all. It’s man at his best. The highest morality that he’s capable of ” 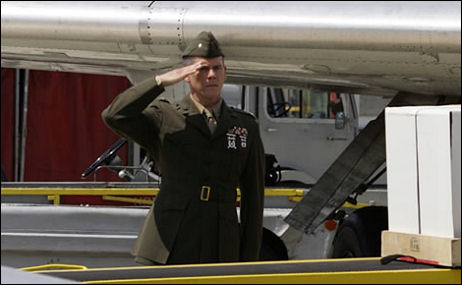 These words were spoken as part of a long and windy tea-time speech that James Garner gave in Chayefsky’s The Americanization of Emily (’64) , and wow, did they all came rushing back to me yesterday afternoon as I watched Ross Katz‘s Taking Chance! This is a movie that left a very conflicted taste of my mouth.

It’s a sad, subdued, meditative drama about a middle-aged Marine officer (Kevin Bacon) escorting the body of a young Marine killed in Iraq to his family’s home in Wyoming for burial. It uses emotional and aesthetic restraint to make its points. Katz is no charlatan– he has good chops. But in terms of giving voice to red-state sentiments about the valor of war — and by extension the nobility of the Iraq War effort — Taking Chance shows almost no restraint at all.

I admired it for the respect and sadness it shows for our fallen dead — don’t get me wrong. But at the same time it’s a faintly dishonorable film. Yes, that’s what I said — dishonorable.

Taking Chance moves you with understated eloquence about the profound and lasting sadness of a young man dying in a war (any war) with so many decades of potentially rich life taken from the soldier and his loved ones and his unborn children. But the movie does something else. It sells the honor and glory of combat death in a “sensitive” way that is not only cloying but borders on the hucksterish. Which I feel is a kind of obscenity.

One result of this sell job is that it lends an aura of dignity and nobility to a conflict that was launched upon lies and neocon arrogance and idiocy, and that war simply doesn’t deserve the respectful salute that Taking Chance obliquely extends.

I’m not objecting to this film offering a modest and moving tribute to our fallen dead. I was in fact moved by this. But Ross Katz knows full well that Bush, Cheney, Rummy and Wolfowitz will cream in their pants when they see this thing. Is he proud of this? Because I think Taking Chance is catering, in a roundabout way, to not just the red-state sentiments that have prolonged the Iraq War (and which certainly prolonged the Vietnam War) but the kneejerk neocon thinking that has also kept us in that terrible situation.

The fundamental objection I have to Katz and the film is the underlying spin behind the general honoring of brave young men suffering ghastly death and mutilation under the wind-whipped stars and stripes. Garner’s Emily speech talks about the obscenity of selling the valor of war death — the tributes, statues and Memorial Day parades that praise and worship the act of being killed in combat — because it perpetrates the carnage through decades and generations and centuries.