Nicolas Winding Refn‘s Bronson, which I just stumbled out of, is, I must say, audaciously directed. A stark, blunt prison drama (with two brief episodes outside the slammer) that’s more of a performance-art piece than anything else, it’s about an incorrigible, mentally thick, ultra-violent career criminal who lives to strike blows and inflict pain and bang his shaved head against the proverbial wall. 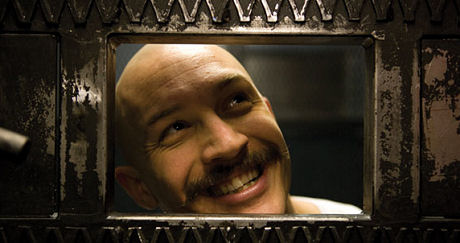 And there’s never any doubt throughout it that Refn is incapable of compromising on any front. This is in-your-face filmmaking, all right. Nor is there any doubt that Tom Hardy‘s performance as the semi-legendary Charlie Bronson, an actual criminal who’s been in British prison for the last 34 years, is quite the madman show.

But just as Bronson is described in the film as “pathetic” and “ridiculous” in his inability to do anything except rage and bellow and beat up on people, so is the film pathetic and ridiculous by way of sheer numbing repetition. The same note is hit over and over and over and over and over and over and over. Until the third act when Bronson develops a facility with the drawing and painting of violent images. The big growth moment happens when he finally decides to paint one of his victims rather than simply assault the shit out of him. Progress! The better angels!

But before this last bit Bronson is, all things considered, a bore. Surely the most boring prison film of all time. Refn’s direction is so fierce and single-minded that he makes you feel like you’re caged in solitary. Hardy’s performance is so repetitive — enraged , pulsing, blazing mad from start to finish — that you begin to wish that Bronson would kill someone, get caught and be sentenced to death because then, at least, there would be a merciful end.

The New York critics who went “apeshit” over this film need therapy. There is really and truly something wrong with anyone who comes out of Bronson with joy in his/her heart and smiling from ear to ear. Refn is certainly one fierce bird of a director, okay. Hardy gives the part everything he has, yes and yes. But the experience of watching the damn thing!

MSNBC runs prison docs in the off-hours, and every so often they profile one of those blood-beast psychopaths who revel in their monstrousness. Any one of these profiles, which I find myself watching from time to time, is more interesting — personal, realistic, disturbing — than Bronson.