Creepy Rightie Clan (Except For Otis)

Two days ago L.A. Times “Big Picture” columnist Patrick Goldstein wrote a fair assessment of Peter Jones‘ Inventing L.A.: The Chandlers & Their Times. I saw the doc at Santa Barbara’s Lobero theatre last night and agree with most of what he says. But the film ends on a bizarre note of omission that I found almost deranged. 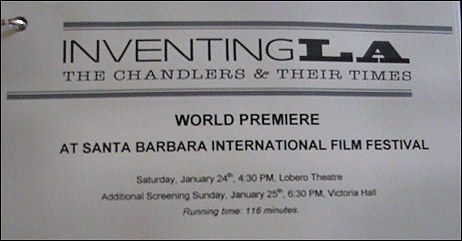 Inventing L.A., which will screen later this year on PBS, is a sharply focused, generally fair-minded and very well-ordered portrait of a family of ultra-conservative robber barons — the Chandlers — who used their newspaper, the Los Angeles Times, to sell L.A. to the rest of the country as a land of opportunity and a warm and balmy paradise, union-free and especially friendly to decent white folk.

It all began with founder Harrison Gray Otis, continued with his son-in-law Harry Chandler, and then Harry’s son Norman Chandler and his wife Dorothy Buffum Chandler, and finally Otis Chandler — the first guy in the family to really believe in and practice aggressive journalism and who, during his publishing reign from 1960 to ’80, made the L.A. Times into the highly admired (if considerably weakened) newspaper it is today.

The bizarre part is that Inventing L.A. ends with (a) the purchasing of the Times-Mirror company by the Chicago-based Tribune Company in 2000 and (b) the death of Otis Chandler in February ’06, but without any mention whatsover of the purchase of the Tribune Co. by Sam Zell and — hello? — the gradual creeping death of print journalism.

Jones’ publicist told me last night that he wanted to keep the focus on the Chandlers and not print journalism per se. I understand that. But Jones’ decision to end his film this way is akin to his having made a documentary about the 19th Century and early 20th Century Russian aristocracy and particularly Czar Nicholas II and deciding to end it without mentioning Bolshevism and the Russian revolution of 1917.