“The sun floods the wide sky in Silent Light like a beacon, spilling over the austere land and illuminating its pale, pale people as if from within,” begins Manohla Dargis‘s N.Y. Times review. “A fictional story about everyday rapture in an isolated Mennonite community in northern Mexico — and performed by a cast of mostly Mennonite nonprofessionals — the film was written, directed and somehow willed into unlikely existence by the extravagantly talented Carlos Reygadas, whose immersion in this exotic world feels so deep and true that it seems like an act of faith. 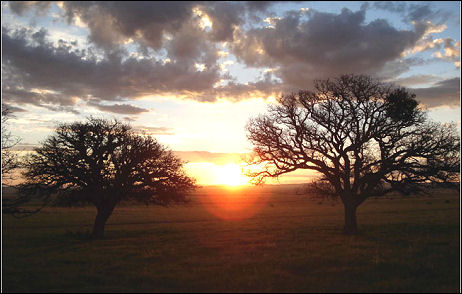 “Mr. Reygadas’s faith may be more rooted in his own gifts than in God, but it’s the sheer intensity of this belief — which he confirms with every camera movement — that invests his film with such feeling.

“This stubborn, passionate intensity is evident in the mesmerizing, transporting opener, in which the seemingly unmoored camera traces a downward arc across a nearly pitch-black night sky dotted with starry pinpricks. Accompanied by an unsettling chorus of animal cries and screams (what’s going on in there?), the camera descends from its cosmic perch into the brightening world and then, as if parting a curtain, moves through some trees onto a clearing that effectively becomes the stage for the ensuing human drama.”