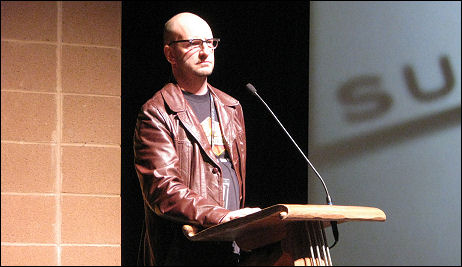 Steven Soderbergh during q & a at the Eccles theatre following showing of the not-half-bad The Girlfriend Experience, a recently shot lowball indie (it cost around $1.4 million) which he called a “work in progress.” It seemed fairly complete to me.

I was pretty okay with The Girlfriend Experience. It smacks of right-now verite, is smartly written and very well made. (And recently shot also with all kinds of references to the Obama-McCain race and the economic meltdown.) No one would call it the stuff of high Shakespearean drama, but I wasn’t bored for a second. It’s smallish and low-key like Soderbergh’s Bubble but set in Manhattan and focusing on a very pretty upscale prostitute and the various men in her life — boyfriend, journalist, high-rollers looking to buy her favors, Kenny’s character, etc.

I presume that everyone reading this knows that Soderbergh is far too dry, ironic and circumspect to be a provider of hot sex scenes or even mildly suggestive ones (as in, say, Alan Resnais’s Hiroshima Mon Amour). He maintains a cool distance in this regard at all times, which is welcome considering the appearance of Grey’s clients. Some of them, I mean. Two or three inspired a prayer from yours truly: “Please, God, I don’t want to see any middle-aged butt cheeks or bloated stomachs or funny-looking feet.”

Soderbergh frames most of The Girlfriend Experience with static medium and long shots — there are almost no close-ups. He said during the q & a that the photography in Michelangelo Antonioni‘s Red Desert was an influence. 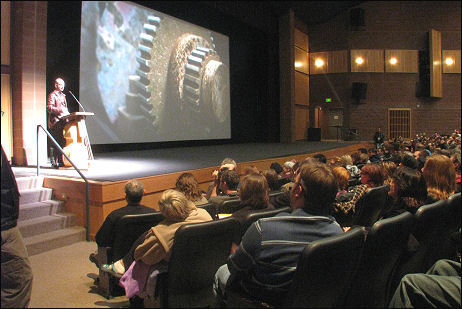 I didn’t know what the title meant until I looked at The Girlfriend Experience IMDB page. A trivia notes posting says that “a call girl advertising the provision of a ‘girlfriend experience’ is implying that she provides deep French kissing, ‘full service’ intercourse with protection, and oral sex without protection.”

This reminded me of the services that Ashley Alexandra Dupree allegedly provided (or were sought out by) former New York Governor Eliot Spitzer. I wonder if the Spitzer scandal inspired this film to any extent.