My initial inclination regarding Humpday, a Sundance Dramatic Compettion movie about two 30something buddies who decide to fuck each other on camera as a kind of amateur-porn Zack and Miri art project, was to shine it. Any and all movies involving the spreading of male butt cheeks generally gets a pass from me. (And I don’t want to hear any homophobic dings about this. Saying “later” to the watching of gay boning in Park City isn’t quite the same thing as putting it down or condemning it, God forbid.) 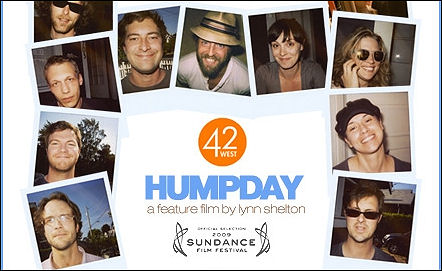 But now I’m thinking “maybe, I don’t know, possibly” due to two factors.

One, a form of semi-infectious enthusiasm coming from the “friends and colleagues” of Spoutblog’s Karina Longworth, who recently wrote that it’s “definitely the domestic narrative competition feature that’s come up most in conversation.”

And two, my having been invited this morning to a Humpday party and a press day, which…I don’t know, conveys a certain confidence and a suspicion that the film, directed and written by Lynn Shelton, might not be a huge problem. Staking a claim to respectability with a party can sometimes mean something. In the same way that it made sense, conversely, that Thinkfilm’s Mark Urman decided against throwing a party for Zoo, the horse-fucking movie that played at Sundance ’07.

I still say “trust no one” and “caveat emptor” when it comes to any kind of smallish Sundance movie looking for attention by pushing any kind of sexual-behavior envelope. Because, as we all know, any kind of “whoa, haven’t seen that before!” buzz tends to turn heads. And the ability to turn heads means next to nothing. Okay, it means something.

January 13, 2009by Jeffrey Wells30 Comments
« Previous post
Once Upon A Time
Next post »
Polanski Helped By Victim