I didn’t expect very much from Armando Iannucci‘s In The Loop, a Sundance ’09 movie that I caught here last week. The notes made this low-budget British political comedy sound too ambitious and convoluted and cross-burdened. Except it’s not. It’s easily one of the funniest comedies about governmental inanity and media mis-speak I’ve ever seen. It also felt to me like one of the fastest laughers of this type since Billy Wilder‘s One, Two,Three. 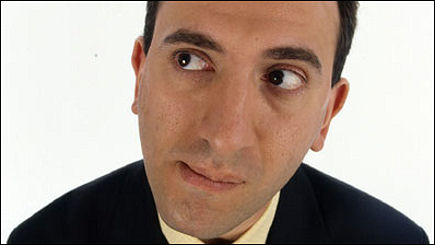 In The Loop director-writer Armando Iannucci

And it has some absolutely wonderful insult humor. I’m talking one beautiful saber thrust and club-bludgeon after another.

Suffice that my pre-viewing concerns evaporated almost immediately. The reason I didn’t expect a lot going in is that I didn’t know Iannucci — he’s a successful British-based comedian, writer, director, performer and radio producer — or anything about his shows. I didn’t know squat, for instance, about The Thick of It, a 2005 political satire for BBC Four that Iannucci devised, directed and largely wrote. Some of the British government characters in In The Loop originally appeared in The Thick Of It.

In The Loop is basically about how the media can sometimes focus on a gaffe by an official or spokesperson and make it sound (via sheer repetition and obsession) to represent firm government policy concerning this or that major issue. In The Loop‘s major issue is a potential military conflict involving U.S. and British troops — think Iraq in ’02 — but the humor is about how various second- and third-tier government types in London and Washington try to dodge, maneuver and counter-spin their way around an essentially meaningless statement by a British cabinet minister that war is “unforeseeable.” Meaningless and yet strangely meaningful once the media gets hold of it. And the source of endless misery for many people.

Some of the In The Loop-ers.

“Wickedly sardonic and filled with secrets, lies, leaks, plugs, and faulty intelligence and walls, In the Loop leads us behind closed doors to reveal bungling bureaucrats entangled in petty rivalries, obsequious aides jockeying for favor, and the Keystone Cops of government,” say the Sundance notes.

Every cast member — Peter Capaldi, James Gandolfini, Tom Hollander, David Rashe, Gina McKee, Chris Addison, Anna Chulmsky and Mimi Kennedy topline — is clearly on the same Iannucci wavelength. They know they’re working with great material, and so do we. What is unmistakable is that they’re all having enormous fun with the material, although in a very assured and ultra-disciplined way.

I was so taken with In The Loop that I asked to speak to Iannucci. He called from London last Friday or something. (Thursday?) Our discussion speaks for itself. I’m hoping to meet with him in Park City, along with Gandolfini and Kennedy.