For several months I’ve been suppressing a thought about MSNBC’s Chuck Todd out of a fear of sounding banal and superficial, but — I think Andy Warhol would back me up here — the only thing lamer than saying something shallow is being afraid to sound shallow. So here goes. It’s real, it’s happening, and it can’t be ignored any longer. 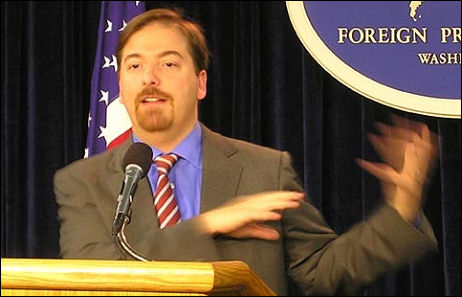 Todd is only 36 years old, and his hairline is in serious trouble. As a TV reporter and the chief White House correspondent for NBC and MSNBC, Todd really doesn’t want to be a baldie — I know he doesn’t want to put out that metaphor — so he does need to do deal with it, Joe Biden-style, before it’s too late. The remedies are simple and affordable.