P.J.Hogan‘s Confessions of a Shopaholic (Disney, 2.13.09) may or may not turn out to be decent, good or even entertaining. It’s based on the three known ‘Shopaholic’ books by Sophie Kinsella, and Lord knows there are enough sufferers of this syndrome out there to command attention. 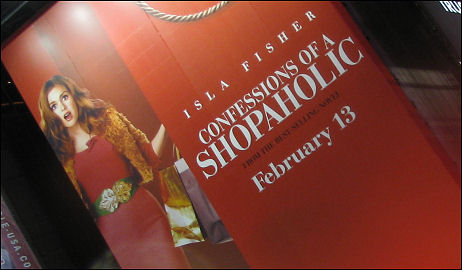 TImes Square billboard, corner of 45th and Broadway (or something close to that).

But talk about a movie that fairly screams “yesterday,” “Bush era” and “before the subprime mortgage meltdown.” What reasonable person in this economic climate is even thinking about being a shopaholic these days, outside of the fairly loaded? Even the well-off are probably telling themselves to curtail the impulse. I’m not saying that lots of people don’t still use shopping in the same way others use cigarettes, drugs, sex and work, but it’s an activity that has lost much of its relevance in the current configuration.

Unless, that is, you’re a quarter-inch-deep Sex and the City fan who refuses to let go of indulgence fantasies and your mantra is “mememememe!” In which case all bets are off.