As sorry as I am about the passing of Patrick McGoohan, I wasn’t that taken with his internals on-screen. I loved, of course, the magnificent snap, crack and timbre of his voice — what an instrument! — blended with that purring Irish-English accent. But McGoohan always — almost always — played creepy obsessives with cold eyes and cold souls, and I can’t say I ever liked him all that much. 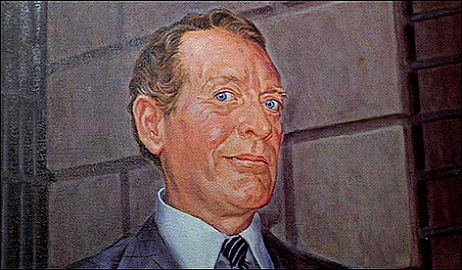 I respected him, naturally, for his chops, for that undercurrent of whatever, for that well pedigreed quality. He was a first-rate actor.

I loved the metaphor of The Prisoner, the ’60s TV series, but I never watched more than a couple of episodes — sorry. McGoohan, for me, was defined by his series of twisted and malevolent big-screen pricks in Silver Streak, Escape From Alcatraz, Scanners, Braveheart, etc. Yes, he was very good at putting out this particular mood and color.

What kind of actor in his right mind would turn down the James Bond role over moral grounds? He once stipulated “no kissing” in his contract for Danger Man, the British TV action series. I seem to recall reading way back when that he was a bit of a conservative prig, an old-school moralist, etc.

And why, with his British theatre background and that awesome voice, didn’t he appear on Broadway more often? In 1985 he was nominated for a Drama Desk Award played a British spook in a stage production of Hugh Whitemore‘s Pack of Lies, opposite Rosemary Harris.