My parents made the mistake of moving into an assisted living facility called East Hill Woods a few years ago. My father was fond of calling this compound, located in dull-as-dishwater Southbury, Connecticut, “death row.” It’s a clean, quiet and very friendly concentration camp for the aged — tidy and comfortable and absolutely horrible for the human spirit. (Mine, anyway.) I would rather collapse and die on a New York street in the dead of winter than live in one of those hell-holes. 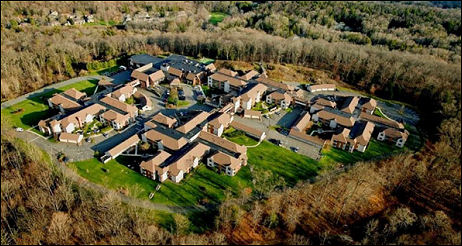 The Watermark at East Hill Woods

Things took a turn for the worse two or three years ago when EHW was acquired by a corporation and was re-named the Watermark at East Hill Woods. I knew that was trouble the minute I heard it. Sociopaths, I presumed, would now be determining how my parents lived out their last years.

Jim and Nancy Wells owned a roomy and beautiful Cape Cod-styled home in Wilton, Connecticut, for 30 years. For reasons of fear and uncertainty they decided to sell the home in ’94 (it would now be worth around $900 grand) and buy a nice condo in Heritage Village, which was very pleasant and spacious with low maintenance costs. Then my mother got scared all over again and convinced my dad to sell the Heritage Village condo and buy a unit in East Hill Woods — a $100 grand buy-in plus a monthly maintenance payment of close to $4 grand that went into a kind of “kitty” fund that would eventually help to cover their old-age medical costs.

That was the bottom-line comfort factor for my mother — that the East Hill Woods pricks would at least take care of her when she got really old and sickly.

Except my mother’s income went down sharply after my father’s death last June, and to reduce costs the Nurse Ratched administrators at the Watermark moved her into a one-room unit — the size of a very small laundry room plus a decent- sized bathroom. Now these same people want to move her into an even smaller room — a broom closet. The only thing more humiliating would be to put her into a large military-hospital room with several beds on either side, like the ones that tend to soldiers in movies like Patton and A Farewell to Arms, and zero privacy. What contemptible pricks.

Assisted living centers are about one thing principally — emptying out the saving accounts of old people and getting every last dime. East Hill Woods pocketed every last cent my parents had. Now that there’s almost nothing left and profits are down they’re taking away what’s left of my mother’s dignity in the name of trimming expenses. It’s times like these when I really wish I was in with guys like Tony Soprano and Silvio and Paulie Walnuts .