“Unmistakably to its plinth”

Steven Soderbergh‘s Che “begins with a pair of boots. More than four hours later, that is pretty much how it ends, too. The first boots belong to Che Guevara (Benicio Del Toro), who is wearing them, together with his trademark combat fatigues, while being interviewed in Havana, in 1964. He wears the same outfit later that year, in New York, as a way of indicating, to the United Nations and to any bien-pensants who can gaze at him without drooling, that even in this city of chatter he remains an undaunted man of action. 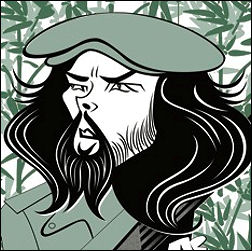 “The second pair of boots, by contrast, is the last thing he sees, as he dies on the floor of a Bolivian hut; they belong to the officer who has come to check that Che, caught and shot, has finally given up his troublesome ghost. The visual echo is a fitting one, since, whatever the private impulses that fired this work, there is no doubting Soderbergh’s desire to shoot at ground level — not to linger on the loftiness of political ideals but, instead, to get down amid the dirt, sweat, and despair of putting them into practice.” — from Anthony Lane‘s New Yorker review, dated 1.19.09.