Of all time. Or at least in my experience on this planet. It’s amazing to me that there are people in third-world countries who are actually paid money to design and manufacture these back-breaking coil-spring mattresses. They must know, surely, that the possibility of people feeling comfortable enough to actually fall asleep on them is very slight. I’ve slept better on hard-metal cots in city jails. 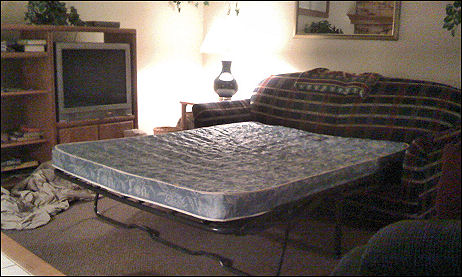 You have to be a sadist to make one of these things; you certainly have to be a masochist to willingly sleep on one. I gave up after four, four and a half hours. Awful.

I’m in a new place on Friday so it’s nothing to obsess about. But the combination of sitting through tonight’s opening film, the claymation Mary and Max (which is partly about a 44 year-old morbidly obese guy, voiced by Phillip Seymour Hoffman) on top of another night trying to sleep on this torture mattress from Jakarta…I don’t know. Feels like a tough combo.

The insulation in this cardboard milquetoast condo, located on Park City’s Windrift Lane (a little bit of a hump north from Kearns Blvd.), is on the shitty side also. I can feel the frigid early morning air seeping through the window behind me. The cheapest home-building materials known to modern man have gone into the construction of thousands of Park City condos. I know, having stayed in quite a few since the early ’90s.

This is a fairly typical example of middle-American architecture and home construction when penny-pinching figures in. Icy air leaking into the living room and yet the guy who designed this one went in for a little counter-flourish by installing a tiny jacuzzi tub — a poor man’s jacuzzi — in the bathroom. Hey, I’m Tommy Tune! A home, in other words, that’s a little more about show than substance.