N.Y. Times critic Manohla Dargis knows her Jerry Lewis, all right. The remarks that Lewis will speak on tonight’s Oscar show aren’t going to bite the hand. He’s a politician, in his 80s, knows it’s his last moment in the sun. The real Lewis comes out in private, and it’s usually a humdinger. Ask Shawn Levy. 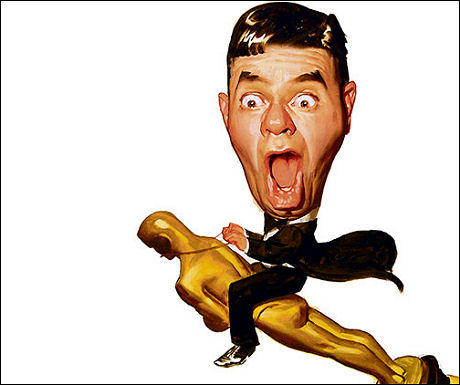 I sat down with Jerry Lewis at the ’95 Sundance Film Festival to talk about Funny Bones. The interview happened at the Stein-Erickson. Right away you could feel the testy fear-factor vibe, but I enjoy that as it sharpens your game. Several people (publicists, etc.) were sitting and standing around us in a semi-circle; it was almost like we were performing together.

A year or two earlier I’d read and enjoyed Nick Tosches‘ Dino: Living High in the Dirty Business of Dreams, so I asked Lewis if he’d read it. He had, he said, and I knew right away I’d stepped in it. The book was hurtful to a friend, he said, and that was the end of it. “Ask me something else,” he said, steam literally hissing out of his head like a radiator, “before I get pissed.” Before?

But I liked Lewis overall. He’s tough, shrewd, funny, been around, done it all, seen it all.