Buzzed on the Beach

And the favored/probable winners at today’s Film Independent Spirit Awards will be….uhm, I had the nominees pasted somewhere, can’t find ’em, whatever. I know this much at least — hooray and hip-pip for Melissa Leo! Okay, the nominees are posted on this IFC.com news page. Get it together already.

If I was in Los Angeles I’d be driving over on the motorcyle to the big circus tent on the beach in Santa Monica around 11 am or so. Wine and champagne schmooze time begins around noon and the show, hosted this year by the great Steve Coogan and beamed by the IFC Channel, will kick off around 2 pm. And then the after-party at Shutters. Except I’m here in New Jersey/New York, where it was Northern Canadian cold last night.

Ballast is also nominated for the Best Feature along with Frozen River, Rachel Getting Married, Wendy and Lucy and The Wrestler. The winner, I’m guessing, will either be The Wrestler or Rachel Getting Married. Could Frozen River take it? I don’t think so. The secretly-agreed-upon deal is for Melissa Leo to take the Best Actress award and maybe Courtney…I don’t want to give too much away.

Who cares about the Best First Feature award? We all should this year because it presents an opportunity for Synecdoche Judgment Day, yay or nay. Will they give it to incorrigible gloom-head Charlie Kaufman or the Latino guy who directed Sleep Dealer, which I saw at Sundance ’08? The nominees are Afterschool, Medicine for Melancholy and Sangre de Mi Sangre besides Sleep Dealer and Synecdoche, New York. 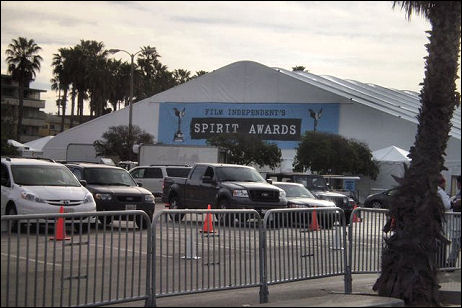 Nobody cares about the John Cassavetes Award, which is given out to the best feature made for under $500,000.

The Best First Screenplay Spirit Award will go to Milk‘s Dustin Lance Black as a symbolic repudiation of the the pro-Prop. 8 position held by former L.A. Film Festival director Rich Raddon, who worked for FIND and who resigned on or about 11.25.08 after his monetary contribution to the Prop. 8 campaign became known. The indie gay contingent and their many supporters need to make the point that intolerance won’t be tolerated in the FIND ranks, and so Black wins for writing a screenplay about a legendary martyr to the gay-rights cause.

The other contenders for this award — Lance Hammer (Ballast), Courtney Hunt (Frozen River), Jonathan Levine (The Wackness) and Jenny Lumet (Rachel Getting Married) haven’t a prayer against this.

Best Supporting Male: James Franco (Milk), Anthony Mackie (The Hurt Locker), Charlie McDermott (Frozen River), JimMyron Ross (Ballast), and Haaz Sleiman (The Visitor). Mackie is entirely right and convincing in Locker, but the award will probably go to Franco, who did a fine job. (And who deserves props for repeatedly kissing a fake-bearded Sean Penn, who always has cigarette breath on top of everything else.)

I haven’t time to list all the others. Que sera, sera.