According to the photo editor of London’s Daily Mail, the below photo, chosen to illustrate an article by reverse-mortgage pitchman Robert Wagner called “I blamed myself for Natalie Wood’s death: Robert Wagner on the night his wife disappeared,” is a shot of Wagner and wife Natalie Wood in All The Fine Young Cannibals. 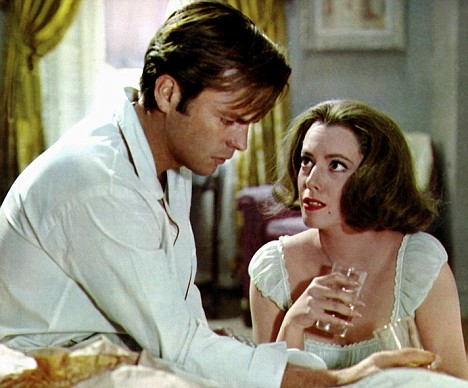 If the woman in this photo is Natalie Wood I’m Alanis Morissette. Look at her eyes and her teeth. Tell me she doesn’t summon thoughts of a flesh-eating ghoul ready to take a bite out of Wagner. Tell me she doesn’t look like a candidate to costar four years hence in Roger Corman‘s The Tomb of Ligea. (A reader informs that the actress is actually Susan Kohner, who retired in 1964 and later became the mother of Chris and Paul Weitz.)

So who’s worse at the end of the day? The Daily Mail photo editor or the woman who mentioned The Mysterious Case of Benjamin Button on the Chris Matthews Show this morning?