According to a 3.26 review of the London production of Tasmina Reza‘s God of Carnage, which starts previewing here on 2.28, it “savagely rips to shreds the pretensions of the liberal middle class.” I’ve read about the London run, walked by this 45th Street marquee last night, and am figuring that any play with Jeff Daniels, Marcia Gay Harden, James Gandolfini and Hope Davis must have exceptional chops and content. 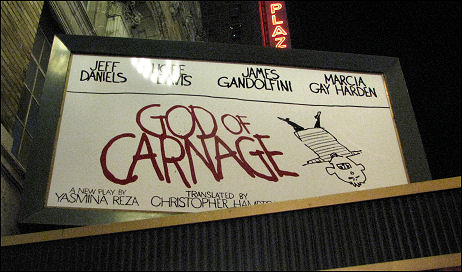 On top of which a straight play that the tour-bus crowd won’t be flocking to (at least not initially) is right up my alley.

The setting, says the Herald Tribune/AP review, is “the comfortable home of a 40ish couple (Davis and Daniels, I’m guessing), and their uncomfortable guests are another couple (presumably Gandolfini, Harden), whose 11-year-old son has bashed their host’s son with a stick, knocking out two teeth.

“The couples hope to resolve the situation amicably; they are deluded. Before long, their mild discomfort and unease have exploded in a torrent of anger, fear, jealousy and rage. There is drinking, fighting, vomiting and the destruction of tulips,” all of basically feeds into “a living-room Lord of the Flies.

“Reza’s plays have a serious thesis: liberal ‘civilization’ is wafer thin and we are all savages underneath. She insists her works are tragedies, not comedies.

“Whether this is profundity or philosophy-lite is debatable. It is, perhaps, typically British that in Christopher Hampton‘s punchy, fluent translation, the fury is played for laughs. Comedy or tragedy, God of Carnage is an expert piece of stagecraft, and savagely funny.”