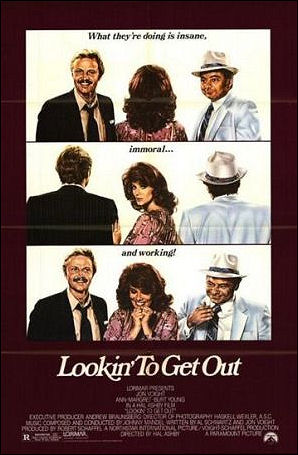 A ramshackle, loose-shoe hustling-and-gambling comedy starring Voight, Burt Young and Ann Marget, Lookin’ to Get Out was shot in ’80 but held up for two years. It cost $17 million to make and was a spectacular wipeout when it finally opened, grossing a total of $832,238 in the U.S. (per the IMDB).

It’s the only film to costar Voight, his then-wife Marcheline Bertrand (who died in late ’07 and has a walk-on part in the film) and 5 year-old Angelina Jolie, who made her screen debut here as “Tosh.”

In the WHV release Voight, who co-wrote the script with Ashby and someone named “Al Schwartz” (a nom de plume?), explains the backstory: “For various reasons, the film we released didn’t really represent Hal’s best work. I knew every version of the script and every cut, so I was understandably excited, but I also didn’t want to be disappointed. But when I saw it, I knew instantly it had Hal’s touch. The way he took all the elements and made it his own, it was almost like we were working together again. Because when Hal cut his films himself, it was magic.”

Here’s a link to Vincent Canby‘s 10.8.82 review in the N.Y. Times, and an excerpt: “As the film progresses, a terrible sort of chill sets in. One begins to grow uneasy in the realization that all of these frantic turns by Mr. Voight, Mr. Young and the others are going nowhere. It has the look of improvisation that won’t quit. There’s a lot of energy being demonstrated on the screen but, being without focus, it seems merely flatulent. It’s also exhausting.”

This doesn’t stop me. My faith in and admiration for Ashby requires a looksee. The original running time was 105 minutes. The WHV release doesn’t give a running time for the director’s cut but, as Voight indicates, perhaps the upcoming version is more about re-ordering and re-shaping rather than new footage.

Lookin’ To Get Out is being released as part of a package called Directors’ Showcase: Take Four. Three other wipe-outs (i.e., critically derided, box-office tanks) are included along along with David Cronenberg‘s M. Butterfly.

The biggest calamity title is a new director’s cut of Hugh Hudson ‘s Revolution with Al Pacino — easily one of the biggest bombs of Pacino’s career. Also included are John Boorman‘s Beyond Rangoon (which features Patricia Arquette giving one of the least convincing performances as a doctor in motion-picture history), and Michelangelo Antonioni‘s Zabriskie Point — an interesting and rather spooky oddball film set in the late ’60s, but one of the master’s lesser works.