Last night I saw Will Ferrell‘s “You’re Welcome, America: A Final Night with George W. Bush” at the Cort theatre on West 48th. It’s a show for the shlubs — an extended lowbrow comedy skit with a fair amount of back-and-forth repartee between Ferrell and the audience, the sort of thing that could easily enjoy an extended run in Las Vegas. Written by Ferrell and directed by Adam McKay, it lacks depth and reflection but I laughed, dammit — loudly and often.

The best bit happened when Ferrell’s Bush asked audience members to tell him their name and occupations so he could give them a pet nickname (i.e., one of the Real McCoy’s better-known habits/tendencies). In a performance described by N.Y. Times critic Ben Brantley , a guy said he was a reviewer and Ferrell said, “Obsolete profession.” Last night he called upon a woman who said she was a nurse. “I’ll call you tits,” he said right back. A man said he was the mayor of Fort Lee, New Jersey, and Ferrell replied, “Mayor of Shittown.” That one brought down the house.

Ferrell owns it all — Bush, the frat-boy patter, the show, the audience. He knows exactly and I mean exactly what he’s doing. I enjoyed him last night more than all his screen performances combined. If you’re a tourist or someone off the bus from New Jersey you could do a lot worse than pay to see this show. It’s funny, it’s easy to get, and it doesn’t go into the ghastly horror aspects (i.e., the fact that this country was all but decimated within and without during Bush’s presidency) at all. Well, it sort of does once but only for 30 or 40 seconds. In silence.

And then the red phone rings and it’s back to the funny bullshit. “They used to call me gin and tonic,” “Awww, Brownie,” “Diego Luna,” etc. 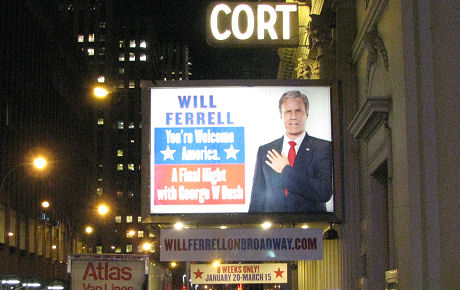