In a righteously angry L.A. Weekly piece about the awarding of the Best Foreign Language Film Oscar to the “relentlessly medicore” Departures instead of the much more deserving Waltz With Bashir , critic Scott Foundas has written that “it seems likely that Ari Folman‘s film was simply too innovative for the Academy’s notoriously calcified tastes. 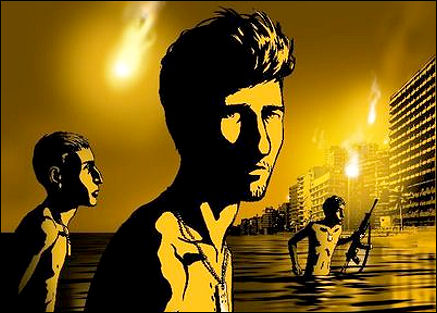 “Certainly, by Academy standards, it was one of the more radical works ever to be nominated in the Foreign Language category — a fragmented memory film in which truth and illusion collide on a tide of uncertain recollection. There are multiple narrators, dreams masquerading as reality (and vice-versa), and so many genres exploded moment by moment that it becomes impossible to squeeze the film into an easily definable box.

“And while Waltz builds to a conclusion that many (including this critic) counted among the most emotionally devastating in movies last year, it is a moment that is earned by the film rather than cheaply calculated, and which raises more questions than it answers. That’s something that many viewers of Folman’s film have found thrilling to behold, but which may well have inspired paroxysms of rage in Academy voters who stand by the belief that a movie should have a clear beginning, middle and end and send people out of the theater feeling better about ‘humanity.'”