How Flush Is He?

“Despite its layer of darkness, He’s Just Not That Into You is a fantasy,” writes Variety‘s John Anderson. “No one has a problem except romance. Neil sails a yacht. Ben and Janine are giving their Baltimore apartment an overhaul that would embarrass Architectural Digest. 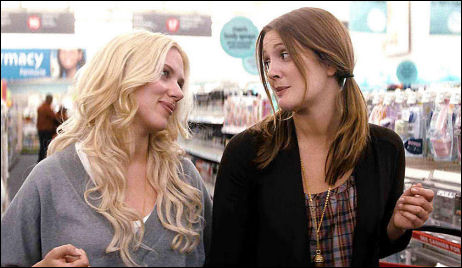 “Perhaps that’s the point. No one has anything to distract them from the minutiae of their love lives, which they proceed to incinerate through overanalysis. It’s a moral fable, maybe, if you make half a million a year.”

Money fantasy issues aren’t restricted to He’s Just Not That Into You. 90% to 95% of all relationship dramas and comedies ignore financial profiles and purchasing power. The last film that dared touch this topic was Friends With Money (i.e., Jennifer Aniston playing a house-cleaner with pals who were either reasonably well off, well off or loaded). The irony, of course, is that while women often say they choose guys based on their warmth, kindness and ability to make them laugh, the truth is that a prospective boyfriend’s income level (i.e., ability provide some degree of financial security) is usually a deal-maker or -breaker with the vast majority of the girls out there.

The last romantic drama that even flirted with acknowledging this? Beats me.

Anderson says that HJNTIY “may also be the first contemporary escapist comedy that feels fully aware of its place in the economic vortex. The lushness, the leisure, the vicarious wealth are all balms to soothe our savaged selves as we look away from the news and onto the screen. Given the state of things, such a movie almost seems like an act of charity toward the public. It’s not screwball comedy, but the underlying sentiments are the same.”