For what it’s worth, I’ve seen Steph Green‘s New Boy, one of the Oscar-nominated Best Live Action Shorts, and understand why it’s won awards in some 20 film festivals worldwide. (Uh-oh…resentment!) Except it is a fine film. It’s about a nine year-old African boy (Olutunji Ebun-Cole) experiencing the usual rough and tumble in getting to know some new classmates at a school in Ireland. 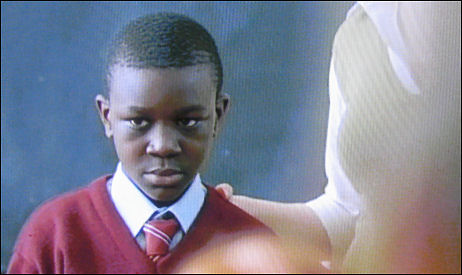 We learn in flashbacks that the boy has come from a turbulent, strife-torn African nation, and that his father was killed by militants of one persuasion or another. More turbulence greets the boy in class, particularly in the form of taunts and challenges from two other laddies who don’t like his looks. They all become friends at the end, of course, bonded in their derisive mockery of the teacher and a young female classmate.

The short is based on a short story by Roddy Doyle. (Resentment again!)

The racial-outsider element didn’t move me all that strongly. I just found it a plain and truthful portrait of what it’s like to define and stand up for yourself in a tough milieu. It reminded me of the hard times I went through during my first few days of fourth grade. (Don’t ask.)