Period Yankees or Forget It

Variety‘s Michael Fleming posted a story last night about Jim Carrey and Jake Gyllenhaal being attached to star in a “contemporized” musical remake of Damn Yankees, which opened as a Broadway musical in 1955 before the screen version, directed by Stanley Donen and George Abbott, opened in 1958. 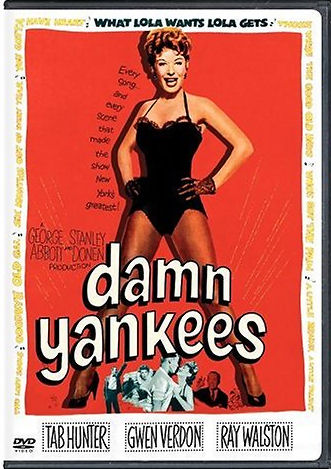 Carey would play Mr. Applegate, i.e., the Devil, and Gyllenhaal would play the dual role of Joe Boyd and Joe Hardy. The plot is about Applegate offering Boyd, a middle-aged baseball fan, a chance to become a suddenly younger man and a gifted ball player (with the last name of Hardy) who could join his favorite team, the Washington Senators, and help them out of a slump and possibly win the pennant.

New Line would fund and distribute, according to Fleming. Lowell Ganz and Babaloo Mandel are set to write the script with the film to be produced by Craig Zadan and Neil Meron (Hairspray). The plan, said Fleming, is “to get the Ganz and Mandel script before meeting directors and actresses who’ll want to play Lola.”

The amusing part of Fleming’s story, presumably fed to him by one of the players, is that “the trick” in making this new Damn Yankees work will be “finding a balance that retains the show’s classic tunes while injecting a contemporary feel on a musical that is firmly rooted in the 1950s.”

Are Lowell and Babloo listening? There’s absolutely no way to contemporize Damn Yankees. It’s a very old-fashioned, 55 year-old musical that seethes with the mood and attitudes of Dwight D. Eisenhower‘s America — a way of living and thinking and dreaming that is long gone, up in smoke and dead, dead, deader-than-dead.

You either have to do it as a full-on period musical (which would actually be pretty cool, now that I think of it) or not at all. Because those songs (Whatever Lola Wants, Goodbye Old Girl, Six Months Out of Every Year, You Gotta Have Heart) are timepieces that have no connection to Obama America…none. The idea could be updated and “contemporized,” but the songs are impossible.

On top of which Damn Yankees has been done to death by community and high-school theatres in every corner of the country for the last 40 or 50 years so doing a movie version is almost like re-making Arsenic and Old Lace.