This is going to sound a little strange, and it’s definitely way late. But something hit me this evening as I was looking at the front cover of the Rachel Getting Married Blu-ray, which comes out March 10th. It’s odd that I never noticed it before since the jacket photo art is the exact same photo art used for the theatrical one-sheet. Anyway… 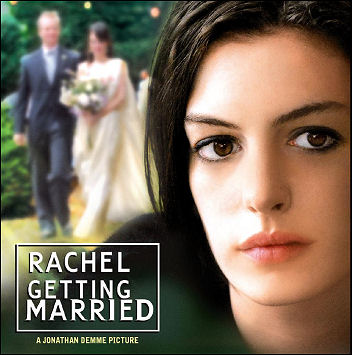 Rachel, as we all know, is played by Rosemarie DeWitt, and the guy she’s getting married to in the film is a bit of a dullard named Sidney, played by Tunde Adebimpe. And Anne Hathaway‘s character, of course, is Kym, Rachel’s older sister who suffering from guilt trips and drug-abuse problems.

Anne/Kym has the closeup on the right, of course, and Rosemarie/Rachel is the much smaller, out-of-focus woman in the background dressed in a flowing gown and carrying a floral bouquet. The guy standing next to her, one would presume, is her fiance. But it’s not, of course. It’s some white guy, presumably Bill Irwin, who played Rachel’s dad in the film.

I think the Sony ad guys put Irwin (or some other unfocused white guy) next to Rachel so as not to raise the interracial marriage issue on the poster. I think they did that as a kind of dodge. Think about it for four or five seconds. The movie’s title refers to a marriage and yet the guy Rachel is standing next to in her wedding gown is not the guy she’s marrying. This doesn’t seem a wee bit strange?

You can say it doesn’t matter because Rachel has a close relationship with her dad in the film (true enough) and dads do give their daughters away in marriage ceremonies so why can’t he stand next to her? I get that, okay, maybe. But consider a flipside view. 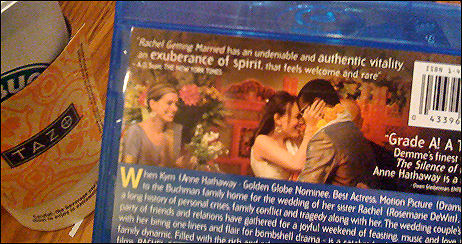 Let’s imagine that Rachel Getting Married is a slightly different film in which Rachel is getting married to some white guy but her stepdad, with whom she has a very close and affectionate relationship, is African American. Let’s go one further and say that the stepdad is the most important relationship in Rachel’s life except for the one she’s about to embark upon with her new husband. Now, what are the odds that the Sony ad guys, wanting to reflect the emotional underpinnings of the film, would put a small, out-of-focus African American guy next to Rachel in the background?

You can say, “Okay, but look at the back of the Blu-ray jacket and there’s a photo of Rachel and Sidney together! Doesn’t that rebut your point?” Partly, I would answer, but not that much. For the photo they’ve chosen shows Adebimpe’s left profile with most of his face covered by Roisemarie DeWitt’s right hand. All you can see of his face is his forehead, which, okay, is dark. But it seems to me that they chose a photo with allows the casual viewer to not necessarily grasp what’s going on.