A less-than-fully-illuminated HE reader concurrently named “FearDread” and “Imogen De Wynter” wrote this morning announcing that “the first legit Watchmen review is up on the Huffington Post.” Let it never be said that Hollywood Elsewhere has it in for Watchmen, at least to the extent that I won’t post friendly descriptions of it. 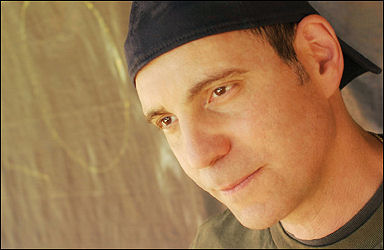 The review’s author, however, is a guy named Mike Ragogna. “In the music business since his teens, Mike Ragogna has been a singer, songwriter, guitarist, keyboardist, producer, arranger and even a songplugger,” the bio reads. “He’s worked on projects ranging from those by Joni Mitchell, Ringo Starr, Burt Bacharach,Toby Keith, Aerosmith, Cher, Sublime and Al Green.”

The “g” is silent in his last name, I’m presuming, so you pronounce it “Ragohnya” like lasagna.

I wrote FrearDread/Imogen De Winter right back and said, “Legit? The guy’s a music industry this-and-thatter — musician, session man, entertainment writer, fringe player. He once worked for Cher. Worse than that, he uses an apostrophe when spelling the possessive ‘its’. What is it that makes him a legit film critic exactly? Help me out.”

And FearDread wrote back with the following: “He writes for the Huffington Post, a highly respected website. The other review you ran [i.e., Matt Selman‘s fanboy riff] originated on the website for Time, a national magazine. These were positive reviews. The negative reviews you have run were anonymous, unsourced and would be thrown out of any court of law in the land. I thought you were a journalist. This kind of behavior wouldn’t get a pass on the National Enquirer.”

To which I responded, “Slow down, Bambi. Matt Selman is a dug-in Simpsons exec producer, a vested industry relationshipper go-alonger and my idea of an ignoble reviewer. And almost anyone with a semi-legit job or position or connection with the right friend can post an opinion piece on the Huffington Post. And by the way, the National Enquirer has delivered some solid reporting here and there and broken more than a few hot stories, including one that legit media types wouldn’t touch until they were forced to — i.e., the John Edwards extramarital affair scandal.

On top of which “the first Watchmen review I ran came from a stone professional who toils for a major media organization, and I’m not going to be goaded by the likes of you into divulging his name and affiliation. The second review-writer is just a guy, but I know him somewhat, he definitely saw the film, he’s obviously intelligent, he obviously knows how to write, knows film, knows the Watchmen graphic novel, and so on. I fail to see the lack of legitimacy.”