Haaretz.com’s Gideon Levy has waffle-ironed Waltz With Bashir in an psychologically exacting, very well written piece that went up sometime late yesterday. He basically says that Ari Folman‘s film lies about Israel’s heart of darkness, and particularly about its culpability in the wanton slaughter of Israel’s enemies, past and present. 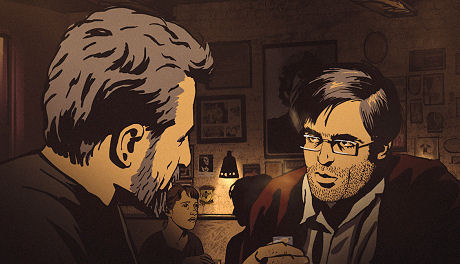 “Everyone now has his fingers crossed for Ari Folman and all the creative artists behind Waltz with Bashir to win the Oscar on Sunday,” Levy begins. “A first Israeli Oscar? Why not?

“However, it must also be noted that the film is infuriating, disturbing, outrageous and deceptive. It deserves an Oscar for the illustrations and animation, but a badge of shame for its message.

“It was not by accident that when he won the Golden Globe, Folman didn’t even mention the war in Gaza, which was raging as he accepted the prestigious award. The images coming out of Gaza that day looked remarkably like those in Folman’s film. But he was silent. So before we sing Folman’s praises, which will of course be praise for us all, we would do well to remember that this is not an antiwar film, nor even a critical work about Israel as militarist and occupier. It is an act of fraud and deceit, intended to allow us to pat ourselves on the back, to tell us and the world how lovely we are.”