Roughly 40 days ago I read a Daily Mail story that said Sienna Miller had been dumped from Russell Crowe and Ridley Scott‘s Robin Hood project (once called Nottingham, now untitled). The reason was said to be Milller’s relative youth and very thin figure, which would have caused the not-thin Crowe to look too old and Friar Tuckish. I don’t know the final egoistic or caloric truth of things, but it’s what I read. 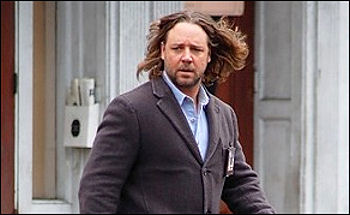 Now the Hollywood Reporter‘s Borys Kit has written that the rail-thin Cate Blanchett has been tapped for the Maid Marian role. Blanchett has always looked more starved than Miller, so one can assume that either (a) Crowe has been laying off starches, carbs and booze and hitting the old treadmill or (b) doesn’t mind looking like Friar Tuck and is cool with the proliferation of Fat Robin Hood cracks that are sure to be heard in comedy clubs nationwide and on Letterman and Leno. Crowe may have simply accepted being a man of constant tonnage.

That or he’s worked himself down to his old Cinderella Man weight (or close to it) and the Daily Mail observation is old news or was wrong in the first place.

It’s just funny how trade stories sometimes never discuss questions that everyone is wondering about because trade reporters don’t get into weight issues. I’m just saying that Crowe’s bulk is what came to mind when I read Kit’s Blanchett story. Instantly, I mean. And aren’t news stories supposed to answer who, what, when, where, how and possibly why?