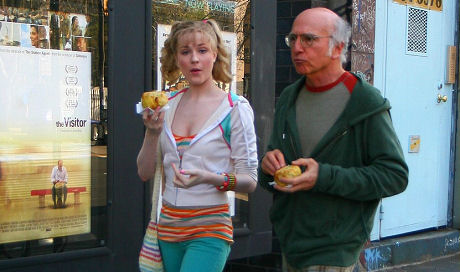 The plot is more or less about a May-December relationship (marriage?) between David and Wood, and her mother, played by Clarkson, somehow persuading a Manhattan-residing British actor, played by Cavill, to try and seduce Wood in order to break up her thing with David, whom Clarkson feels is too old for her daughter.

An HE reader asked last summer, “If you were Evan Rachel Wood’s parents, wouldn’t Larry David (or Woody Allen, who he’s theoretically standing in for) be an improvement over Marilyn Manson in the I Can’t Believe Who My Daughter Is Screwing department?” That’s no longer pertinent as Wood’s relationship with Manson went south last November.