“Few films have evoked the atmosphere of the Bayou State as strongly as Bertrand Tavernier‘s In the Electric Mist,” writes L.A. Weekly critic Scott Foundas, calling it “a movie that doesn’t seem to have been filmed so much as distilled, on a creaking porch beset by mosquitos and summer heat, with the rumble of a gathering storm in the distance. 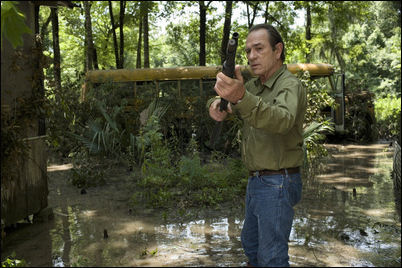 “Adapted from the novel by James Lee Burke, the film stars Tommy Lee Jones as Burke’s popular detective character, Dave Robichaux, here investigating the murder of one Cherry LeBlanc, a ‘fatally beautiful’ 19-year-old prostitute whose mutilated corpse washes up on shore in the film’s opening scene. Not long after that, another body — this one belonging to a lynched black man dead and gone some 40 years — surfaces deep in the swamp, loosed by Hurricane Katrina’s churning tide.

“Since it was first announced, In the Electric Mist has sounded like an ideal project for Tavernier. But it’s become entangled in post-production disagreements between Tavernier and the film’s American producer, Michael Fitzgerald (The Three Burials of Melquiades Estrada). And now two different versions of the movie emerged — an ‘international’ cut prepared by Tavernier, which screened at the Berlin Film Festival and will be released in most countries around the world, and an ‘American’ cut supervised by Fitzgerald that runs 15 minutes shorter and will go directly to DVD in the U.S. next month.

“In comparing the two edits, Variety critic Leslie Felperin deemed the American version ‘brisker but less coherent’ with ‘tacky summing up and [an] ooh!-spooky last shot mini-twist that makes [it] play like a made-for-TV movie.”

“Having seen only Tavernier’s version, I can say that it’s unfortunate American audiences may never get a chance to experience this superior detective yarn on the big screen, in the form its director intended. Unfortunate, but by no means surprising. Indeed, where the default Hollywood position would have been to strip-mine Burke’s source material for its narrative chassis while junking all its atmospheric touches, tertiary supporting characters and curlicue digressions, Tavernier (working from a script credited to the husband-and-wife team of Jerzy Kromolowski and Mary Olson-Kromolowski) does exactly the opposite.

“Much like Burke himself on the page, he plays up the bass at the expense of the melody, showing markedly less interest in the identity of the killer(s) than in a long and winding history of Southern injustice that stretches from Jim Crow to George W. Bush. Long ago, Robichaux says in the lyrical voice-over that opens the film, people placed heavy stones on the graves of the dead so as to weigh down the souls of the departed. But in Burke and Tavernier’s world, every time a storm blows through, those stones become displaced, and restless spirits take to wandering the bayou.”

May I say something? In addition to the mauling of Tavernier’s European version, there’s also the ridiculous mauling of the original title of Burke’s book — In The Electric Mist with Confederate Dead. How could anyone chop off those last three words? That’s like cutting down the title of Hemingway’s Across The River and Into The Trees and changing it to Across The River. The loyal, the devout and the worshipful are surrounded by cattle.