I was stunned when I noticed the absence this morning of David Jones‘ Betrayal, the notoriously missing 1983 adaptation with Ben Kingsley, Jeremy Irons and Patricia Hodges, among films that will compose a three-day Harold Pinter tribute at the American Cinematheque from 3.26 through 3.28. 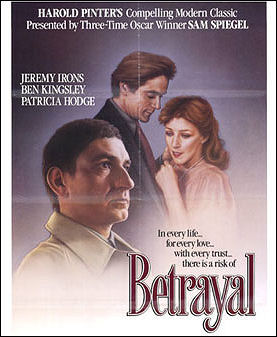 I thought after Pinter’s passing that this captivating, jewel-like drama would at begin to turn up at special venues like the Cinematheque, at the very least. Even when a rights issue has prevented a DVD release of a film, the elite venues (AC, Aero, Film Forum, Film Society fo Lincoln Center, etc.) almost always manage to score a print for a single showing. But not this time.

Written by Pinter as a play in 1978 and then adapted for the screen three or four years later, Betrayal is easily the most elegant, accessible and well-liked Pinter movie ever made. It follows that any film programmer showing a series of Pinter films can’t exclude it without having to answer to guys like myself.

“Nothing Pinter has written for the stage has ever been as simply and grandly realized on the screen as [this],” wrote N.Y. Times critic Vincent Canby 26 years and 4 days ago. “I can’t think of another recent film that is simultaneously so funny, so moving and so rigorously unsentimental. The writing is superb, and so quintessentially Pinter that it sometimes comes close to sounding like parody, though, in the entire screenplay, there’s not one predictable line or gesture, the sort of thing that would expose the fake or the merely hackneyed. This is pure Pinter well served by collaborators.”

I’ve been ranting about wanting to see Betrayal on DVD for at least ten years. And yet no one in a position to explain the whys and wherefores has ever written or called. Nice.

This morning I wrote Chris, the AC programmer, and asked if he could help with info about who owns the prints and control the rights. The family of the film’s producer Sam Spiegel, perhaps? Spiegel died 24 years ago, and you know how weird and conflicted families can sometimes be about inherited assets.

“As you know, there’s no Betrayal DVD at all, and the film hasn’t been seen on video since ’84 when CBS-Fox put out a VHS version,” I wrote. “I find it mind-blowing that you guys weren’t able to at least score a print for a single showing. This means (a) there’s no decent-looking print anywhere and/or (b) whoever owns prints and the rights doesn’t give a hoot, hasn’t tried to preserve or restore the film, isn’t into the potential, etc.”

The three-day American Cinematheque program will show Pinter’s The Comfort of Strangers , The Homecoming, The Servant, The Caretaker, The Go-Between and The Pumpkin Eater.