The Bucks & The Challenge

This morning’s announcement that Sundance Film Festival director Geoff Gilmore is jumping ship for a new gig as chief creative office for Tribeca Enterprises is a wowser, all right. He must have been offered a pretty rich deal to leave the top berth at Sundance, the biggest and most successful film festival in the country. Especially given Tribeca’s financial concerns over the last couple of years. 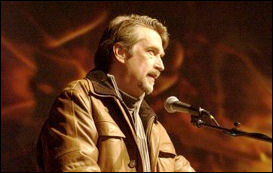 According to a release, Gilmore will be responsible for “Tribeca’s global content strategy and lead creative development initiatives and expansion of the brand.” That means…what, he’ll be trying to establish other Tribeca satelitte festivals like the one in Qatar that was announced last November? Tribeca Film Festivals (or TFF partnerships with local fests) in Beijing, Prague, Paris, Amsterdam, Milan, Madird, Marrakech, etc.?

“I’ve had a wonderful nineteen years at Sundance,” Gilmore said in a statement, “and I will always be grateful to Bob Redford. For me this is a big decision, a huge change and an enormous opportunity.”

But what about that hoo-hah about Tribeca’s finances that came about when they raised their ticket prices a coiuple of years ago? Former Hollywood Reporter guy Gregg Goldstein ran a piece about this on or about 4.24.07, to wit:

“A Tribeca insider does claim that for the past few years, the cost of staging each fest has increased to about $13 million (20% of which is ponied up by the festival’s founding sponsor, American Express), and the event has been running a $1 million annual deficit,” Goldstein wrote, “which comes right out of the pockets of TFF’s Jane Rosenthal, her husband and co-founder Craig Hatkoff and co-founder Robert De Niro.

Hatkoff says that Tribeca “now costs three to four times what it did when it was initially conceived in 2002 as a five-day event that hosted some 150,000 attendees. By last year, it had ballooned to a 13-day event and more than tripled in attendance. And yet the festival has, according to the arithmetic, been bringing in $12 million in revenue to its $13 million in expenses.

“‘The rationale for a bigger scale is that there are fixed costs inherent in running it no matter how large we are,’ Hatkoff told Goldstein. ‘It’s Economics 101. Not having it grow will just exacerbate the cost structure. It’s not about making money for the festival.'”