About 21 months ago Peter Bogdanovich wrote a New York Observer piece extolling the rich, classic, sophisticated virtues of Howard Hawks‘ Rio Bravo. Being a much bigger fan of High Noon than Rio Bravo, I got fairly upset about the Bogdanovich article, and particularly about the inexplicable attitude of righteousness from the Rio Bravo clique. I responded with a July 2007 piece that explained very clearly why all the RB freaks need to shake it off and give it up. 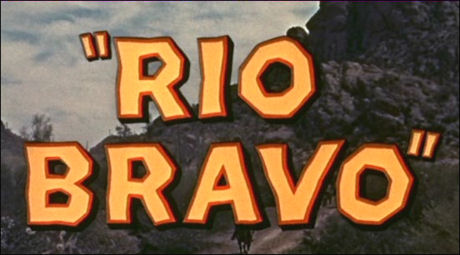 “Goddamn it, the Rio Bravo cult has gone on long enough,” I declared with a contained fury. “Bogdanovich calls it ‘a life-affirming, raucous, profound masterpiece.’ I’m going to respond politely and call that a reach. I admire Hawks’ movies and the whole Hawks ethos as much as the next guy, but it’s time to end this crap here and now.” And then I explained the ins and outs, ups and downs, why and wherefores, etc.

That seemed like the end of it — but no. 2009 being the 50th anniversary of Rio Bravo‘s release, another rabid fan — Wall Street Journal columnist Allen Barra — has picked up where Bogdanovich left off with a 3.26 article called “Rio Bravo, Still Popular and Hip and Hip at 50.” Tenacious little buggers, these Hawksians.

“It wasn’t nominated for any Academy Awards,” Barra begins. “It was scarcely taken seriously by the critics on its release, and it’s never made into the American Film Institute’s top 100. But Howard Hawks’s Rio Bravo, which had its premiere half a century ago this month, may be the most popular cult film ever made.

“The phrase ‘cult favorite’ conjures up images of wobbly hand-held camera shots and little-known actors. But Rio Bravo was shot in glorious [Eastman]color and starred perhaps the most popular star in movie history. Most cult films are too hip to be popular, and most big hits are too popular to be hip. But Rio Bravo is that rarest of films — both popular and hip.” 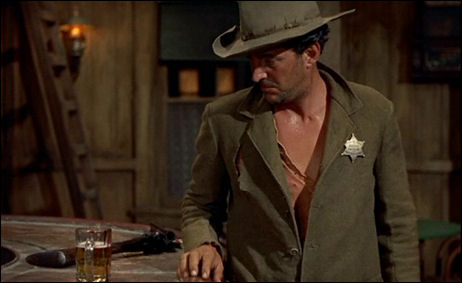 Popular among the Rio Bravo monk-elites, he means. Ask yourself honestly, HE readers — have any of your friends ever suggested watching it over a pizza on a Thursday night or a Sunday afternoon? I’m enough of a Rio Bravo admirer to have bought the Bluray version, but if I were Barra or some other WSJ writer I wouldn’t be delusional enough to think it worthy of a big 50th anniversary fanfare salute like this.

“The first 10 or 12 minutes of Rio Bravo are terrific,” I wrote in ’07, “in the way Hawks introduces character and mood and a complex situation without dialogue. I also love the way John Wayne rifle-butts a guy early on and then goes, ‘Aww, I didn’t hurt him.’ But once the Duke and Walter Brennan, Dean Martin, Ricky Nelson and Angie Dickinson settle into their routines and the easy-going pace of the thing, Rio Bravo becomes, at best, a somewhat entertaining sit-around-and-talk-and-occasionally-shoot-a-bad-guy movie.

“More than anything else, Rio Bravo just ambles along. Wayne and the guys hang out in the jailhouse and talk things over. Wayne walks up to the hotel to bark at (i.e., hit on) Dickinson. It tries to sell you on the idea of the big, hulking, 51 year- old Wayne being a suitable romantic match for Dickinson, who was willow slender and maybe 27 at the time but looking more like 22 or 23.

“Plus the villains have no bite or flavor — they’re shooting gallery ducks played by run-of-the-mill TV actors. Most of Rio Bravo is lit too brightly. And it seems too colorfully decorated, like some old west tourist town. It has a dippy ‘downtime’ singing sequence that was thrown in to give Nelson and Martin, big singers at the time, a chance to show their stuff. Then comes the big shootout at the end that’s okay but nothing legendary. 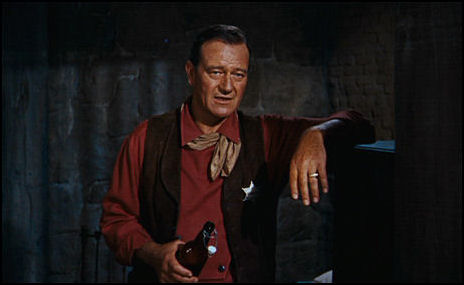 “Does Rio Bravo have a sequence that equals the gripping metronomic ticking- clock montage near the end of High Noon? Is the dialogue in Rio Bravo up to the better passages in Fred Zinneman‘s film? No. (There’s nothing close to the scene between Gary Cooper and Lon Chaney, Jr., or the brief one between Cooper and Katy Jurado.)

“Floyd Crosby‘s High Noon photography is choice and precise and gets the job done. It doesn’t exactly call attention to itself, but it’s continually striking and well-framed. To me, the black-and-white images have always seemed grittier and less Hollywood ‘pretty’ than Russell Harlan‘s lensing in Rio Bravo, which I would file under ‘pleasing and acceptable but no great shakes.’

“Dimitri Tomkin wrote the scores for High Noon and Rio Bravo, but they don’t exist in the same realm. The Bravo score is settled and kindly, a sleepy, end-of-the-day campfire score. High Noon‘s is strong, pronounced, ‘dramatic’ — so clear and unified it’s like a character in itself. And I’ve never gotten over the way the rhythm in that Tex Ritter song, ‘Do Not Forsake Me O My Darling,’ sounds like a heartbeat.”