Yesterday’s suggestion by a Republican congressman that those AIG bonus recipients should resign or kill themselves was treated as a joke. But this is one of the few times when I’ve found myself relating to a Republican viewpoint. And the people who instinctually laughed at this idea should think again 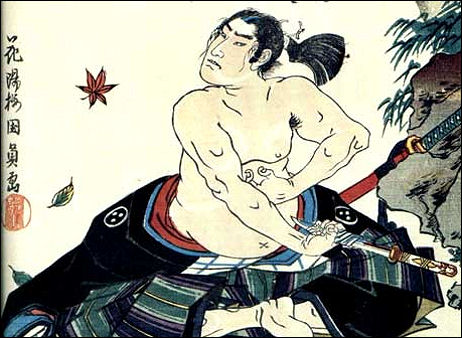 $165 million is nothing compared to the billions in stimulus money that has gone to AIG, but symbolism counts in times like these. The recipients of the AIG bonuses should obviously not only give the money back but atone in some profound and public way.

Imagine the public reaction if just one of them took his shirt off during lunch hour on Wall Street, knelt down and opened himself up with a knife, and then was beheaded by a colleague. People would be aghast and traumatized, naturally, but imagine the respect that would gradually be showered upon this man and his family after people had taken the time to consider the meaning of such an act. “At least he got it!,” people would say.

One of the failings of American culture is that no one believes in shame, much less showing it in public by admitting guilt. Fewer still, if any, subscribe to symbolically (i.e., ritualistically) setting things right with a display of public humiliation and/or suffering. My suggestion two months ago that Wall Street scalawags should be placed in stocks and pillories was also treated as a joke. But I meant it sincerely. And the inability of people in this country to understand, much less respect, the concept of public penance for past sins is — no question — a sign of moral slackitude.

Ritual seppuku has always struck me as an extremely perverse and appalling practice, but at least it’s tied into the concept of honor — which is clearly not something that’s highly valued by the AIG ayholes who are now rolling in that $165 million in bonus dough and dodging the efforts of N.Y. state attorney general Andrew Cuomo to identify and expose them to the public.

That said, the scrappiest and most unequivocal reaction to the AIG bonus scandal was posted yesterday by Young Turks host Cenk Uygur, to wit:

“AIG executives will walk away with $450 million in bonuses,” he wrote, “at a company that was such a colossal failure that it lost $99.3 billion last year and required a $170 billion taxpayer bailout. Worse yet, the executives in the division that caused this epic meltdown will get $165 million in bonuses. I can’t get over the injustice of that.

“But don’t worry — we are told that Tim Geithner ‘was really upset by the news’ and ‘berated them’ over the phone. What a joke! Wow, that tongue-lashing must have really stung. I wonder if their several million dollar bonus will help cushion the blow of being yelled at.

“Geithner is responsible for setting the rules in the first place. It’s all in the rules. If you let people take the money, they will. If you don’t allow it as a condition for receiving the money, they can’t. As the politicians scurry to find someone to blame, they should look in the mirror. They’re the ones that set the rules of this game.

“Now the same politicians who brought you this piece of injustice will claim ((a) there is nothing that can be done and b) will pretend to be outraged and then not fix the underlying problem. The politicians will huff and puff and probably do nothing. So, after all this fake outrage, will this happen again? If this broken incentive system is not fixed, of course it will. You can bet your bottom dollar on it. In fact, you already have.”