“In the last couple of years the industrious Joe Swanberg has managed to turn himself into an identifiable independent name despite having evinced little initial filmmaking talent,” N.Y. Times critic Manohla Dargis has written. “Things look better, however, in his latest effort, Alexander the Last, a 72-minute (including credits) series of loosely connected scenes. 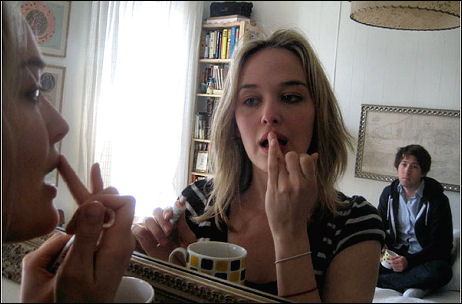 “For starters, he finally has a real actress to look at and undress, the charming, vibrantly alive Jess Weixler, who plays Alex, a rather less appealing actress struggling with the divide between life and art. As important, Alexander comes with an imprimatur of legitimacy because the filmmaker Noah Baumbach (Margot at the Wedding) has signed on as a producer. It’s hard to imagine Mr. Baumbach putting his name to anything without some creative input.

“The story in Alexander emerges elliptically after Alex’s musician husband, Elliot (Justin Rice), heads out for a spell. She soon lands a part in a theater production (the movie was shot in Brooklyn), playing the romantic foil to a vague young man, Jamie (the equally hazy Barlow Jacobs), for whom she develops…well, a vague interest.

“The two advance and parry on and increasingly off the stage, even as Alex’s sister, Hellen (Amy Seimetz), moves in on Jamie. Inhibitions and clothes are shed amid awkward silences, lurching conversations and tentative gestures as the focus shifts between life and the theater, and the two realms become more and more blurred, at least for Alex.

“The only thing truly in focus here is Ms. Weixler’s performance.”