Photos of James Franco on the set of the currently-shooting Allen Ginsberg biopic came my way yesterday. Rob Epstein and Jeffrey Friedman are co-directing and co-writing the drama, which is mainly be about the obscenity trial that followed the 1957 publication of Ginsberg’s “Howl.” I recently shared doubts about Franco’s resemblance to the owlish and very Jewish bookworm-looking Real McCoy, but I have to admit his appearance is reasonably close to the mark at this stage. 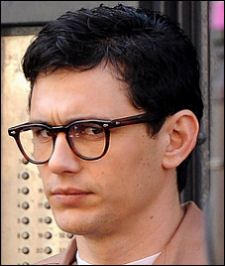 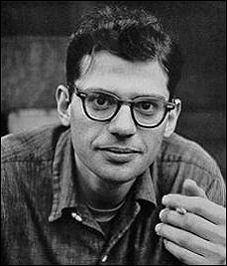 The recent brouhaha about some UCLA students being unhappy with Franco’s selection as a graduation commencement speaker is the other pop-through. Their complaint is that Franco isn’t important or distinguished or gray-haired enough to address outgoing UCLA seniors. I can see their point, but they’re overlooking the stirring arc and metaphor of Franco’s career.

Franco was up as James Dean in ’01 and then experienced seven years of gradual career-slide with City by the Sea, the SpiderMan films, The Great Raid, Flyboys, Annapolis, Tristan + Isolde, etc. And then last year the clouds parted and his life was restored by his gay-guy role in Milk and his stoner pot-dealer in Pineapple Express, and now he’s seriously up again. If UCLA seniors think they’re not going to go through similar up-and-down trials themselves when they get out in the world, they need to think again.