Seth Rogen‘s character in Observe and Report (Warner Bros., 4.10) is a hero in what universe apart from the secular universe of Warner Bros. marketing? “Eeeee!!!,” they scream as they jump up on chairs and tops of desks like girls who’ve just seen a mouse. “A cult film! A cult film! Eeeee!” 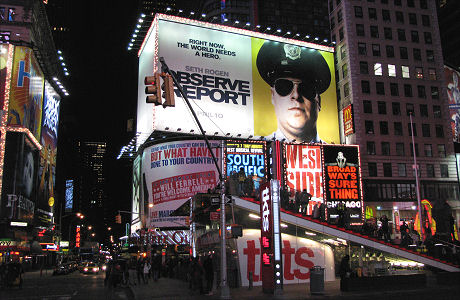 This is not a film, remember, that’s been “played for sitcom jokiness and family-friendly slapstick,” as Variety‘s Joe Leydon explained a few days ago, but which “attempts something much darker, if not downright transgressive, with a pic bound to divide auds and critics into love-it-or-leave-it camps.”

“This movie is a minor miracle, an original and unfiltered dark comedy that demolishes the mainstream-friendly comic persona that Seth Rogen’s been cultivating the last few years,” Drew McWeeny recently wrote from South by Southwest. “It’s convulsively funny, disturbingly violent, and uncomfortably carnal and intimate at times. And it’s not a redemption story about how [Rogen’s character] sorts out his problems and eventually becomes a happy or a better person. It’s a slow slide from bad to worse, and that’s exactly what makes this an instant cult classic.”