The legendary movie-score composer Maurice Jarre died yesterday in Los Angeles at age 84, following a long bout with cancer. I’m probably not the only one who’s feeling a bit forlorn about this. Jarre’s music could be a little sappy at times, a little too on-the-sleeve. But his melodic gifts seemed almost heavenly at times, and he was one of Hollywood’s most impassioned old-time maestros — right up there with Miklos Rosza, Dimitri Tiomkin, Elmer Bernstein, Bernard Herrmann, Alex North, etc. 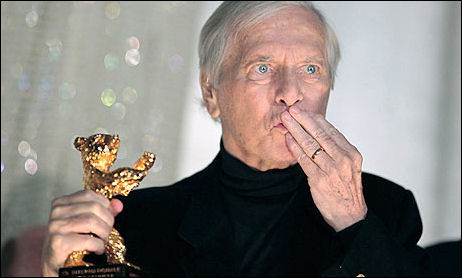 You can love or admire various films, directors, actors, screenwriters, choroegraphers, directors of photography, screenwriters, etc. But music goes right into your heart and makes the spirit take flight. Jarre’s Lawrence of Arabia music is arguably a more vital component in that film’s appeal than Peter O’Toole‘s performance or Robert Bolt‘s screenplay. (They are at least equally matched.) I never loved Dr. Zhivago, but I can’t listen to Jarre’s overture for that 1965 David Lean film without feeling a slight melting in my chest.

His music for Richard Brooks‘ The Professionals (’66) was electric, crackling, alive, heartfelt. I’m also a big fan of Jarre’s score for John Frankenehimer‘s The Train (’64). And his scores for two great Peter Weir films of the ’80s — The Year of Living Dangerously and Witness — are also among his best. I’m humming the Living Dangerously theme right now. The closing-credits music he created for Witness was a profound counter-point to the Philadelphia detective and Amish farmer cultures shown in the film — it stood its own ground.