It’s commonly known that Clint Eastwood‘s The Human Factor, which Warner Bros. (a.k.a., the “Death Star”) will release next December, is based upon John Carlin‘s “Playing The Enemy: Nelson Mandela and the Game That Made a Nation.” Yesterday’s news is that the first half-decent set photos turned up on TheBadand the Ugly. All shot from a distance, no close-ups, fuzzy. 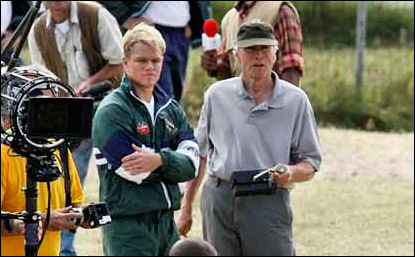 Matt Damon, Clint Eastwood on the South African set of The Human Factor (Warner Bros., 12.09). This and other pics were posted yesterday afternoon by TheBadand the Ugly. I have the script on PDF, but the usual laziness and fatigue has kept me from reading it.

Morgan Freeman reportedly bought the rights to Carlin’s book, and is now producing and playing Mandela in the film. It tells the story of how the 1995 World Cup Rugby Final — a contest between the heavily-favored New Zealand team and the South African Springboks — helped to heal the post-Apartheid racial divide.

Matt Damon, whose hair has obviously been blonded and is now trim and buffed up (i.e., a sharp contrast from the chunky cholesterol bod he grew for Steven Soderbergh‘s The Informant, which may turn up at the Cannes Film Festival two months hence), is playing South African rugby team captain Francois Pienaar.

March 15, 2009by Jeffrey Wells5 Comments
« Previous post
As Time Goes By
Next post »
“And They Are Mild”