Holllywood & Fine‘s Marshall Fine has creamed twice over Mary Stuart Masterson‘s The Cake Eaters, two days in a row — yesterday and today. It opens Friday in an assortment of indiewood theatres. 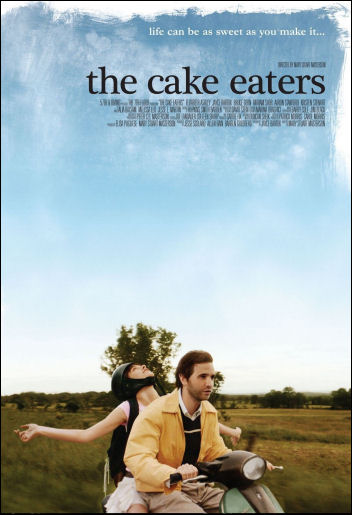 It’s my fault that I haven’t gotten to this. I was invited by a PMK/HBH publicist pal in Los Angeles, but I didn’t try to reach the local NYC rep and she hasn’t tried to reach me. Hello, Lauren Auslander! In fact, hello to all the NYC publicists whom I’m still having to chase in order to go to screenings.

“Everyone knows that this time of year is a dumping ground for movies,” Fine writes. “Theaters are awash in genre garbage and remakes or big-budget eye-candy whose producers or studios lack the stones to face the summer blockbuster competition (or, to put a kinder spin on it, they have the savvy to exploit a slack period in the schedule).

“Why does a spirited, intelligent little film like The Cake Eaters have to beg for a theatrical release? It opens in New York and a few other places this Friday and platforms from there – after more than two years of trying to find distribution (and shortly before its DVD release).

“Directed by Mary Stuart Masterson (yes, that Mary Stuart Masterson) from a script by Jayce Bartok (who plays a lead role in the film), The Cake Eaters is a drama with a thread of romantic comedy that deals with grief, regret and hope. Set in a small town in upstate New York, it’s a charming anachronism — a movie in which people actually talk to each other, minus such modern accessories as cell phones or e-mail. 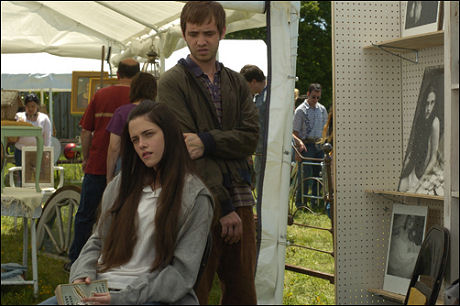 “Though grief is the subtext of the film, life is the subject. Masterson draws beautifully modulated performances from her strong ensemble cast, particularly Kristen Stewart and Aaron Stanford as the unsure but indomitable young lovers.

“Stewart blends delicate emotions with strength of character in a subtle performance that focuses on the character’s wicked wit, without ignoring her physical infirmity. Stanford makes [his character] both inexperienced and sincere, a guy who is pleasantly surprised to discover that a girl’s expectations of him match the ones he has for himself but has kept hidden for too long.

“The Cake Eaters balances sweetness and sadness without ever leaning too heavily on either quality. It’s unfortunate that the market seems to willfully ignore nicely etched little films such as this one – and a feat to be celebrated that this one has broken through for a theatrical run at last.”

I have to be honest and admit that I didn’t try as hard as I could to see this film because I don’t care for the title. I don’t like cake as a dessert or a metaphor. I’ve always shied away from using “you can have your cake and eat it too.” Which doesn’t quite synchronize with Marie Antoinette‘s infamous “let them eat cake” line. I could let every cake manifestation go and not miss any of them for the rest of my life. That said, I’d like to see the film.