After decades of absence, a first-rate DVD of Andrzej Wajda‘s Danton (’83) is due from the Criterion Co. on 3.31, or nearly two weeks hence. I’ve seen this superbly composed historical drama only once, and have never forgotten the vivid writing, the bold performances (particularly Gerard Depardieu‘s as Georges Danton) and the mesmerizing recreations of early 1790s Paris. 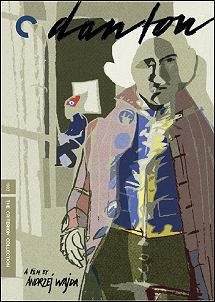 $35 friggin’ dollars for a standard DVD, even if it does contain two discs with many bells and whistles? It gave me pause, I must admit. But this is an epic film, and the transfer quality is up to the usual Criterion standards. Update: I watched the first 20 minutes last night on my 42″ Plasma and it’s almost Blu-ray quality.

Regarded by some as an allusion to the battle between Polish Solidarity and the doctrinaire Communists (including General Wojciech Jaruzelski) who ran Poland and repressed and penalized Lech Walesa and his cohorts in order to hold onto power, Danton is basically about the clash between two revolutionary leaders, Danton and Maximilien Robespierre (Wojciech Pszoniak), and the many guilllotine deaths that resulted on both sides.

Danton is earthy, ribald, impassioned, and perhaps a wee bit corruptible, but also an advocate of moderation and compassion in the handing of so-called enemies of the revolution . Robespierre is exacting, scrupulous, fastidious and morally demanding in a revolutionary sense, a result of this being that he comes to regard Danton’s moderation as a betrayal of the Revolution, which leads to strenuous efforts to slice off his head.

“Without stretching things too much, Mr. Wajda presents us with a Danton who is the articulate conscience of the Revolution, someone, perhaps, not entirely unlike Lech Walesa, the popular spokesman of Poland’s Solidarity movement,” Vincent Canby wrote in his 9.28.83 N.Y. Times review. “On the other hand, Robespierre is seen as being completely removed from the practical needs and real feelings of the people, a stern father-figure of a dictator, a man who doesn’t hesitate to approve the murder of thousands of people for the fatherland’s ultimate good.

“In an interview in Le Monde, Mr. Wajda denie[d] all associations between 18th-century France and 20th-century Poland, though he does say that Danton represents the West and Robespierre the East.” 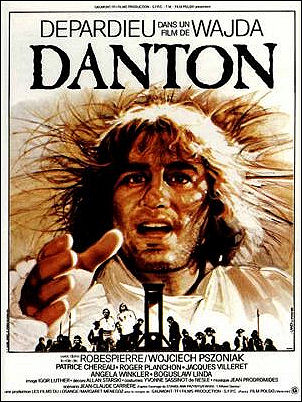