Eight days ago a brilliant dissection of the current financial apocalypse by Rolling Stone‘s Matt Taibbi appeared. I ran a link-and-excerpt last Monday. Today I read an evasively worded, self-justifying whine piece by former AIG financial products unit exec vp Jake DeSantis about why he resigned three days ago. Then I re-read Taibbi’s piece and went into one of my quiet-seething modes.

Then, for mild comic relief, I re-watched the above South Park “Bailout!” clip, which ran a day after DeSantis resigned.

Then I started re-focusing on Joseph Cassano, the ultimate AIG bad guy.

“Then, in January 2009, AIG did it again,” Taibbi’s piece reads at one point. “After all those years letting financial products division president Joseph Cassano run wild, and after already getting caught paying out insane bonuses while on the public till, AIG decided to pay out another $450 million in bonuses. And to whom? To the 400 or so employees in Cassano’s old unit, AIGFP, which is due to go out of business shortly!

“Yes, that’s right, an average of $1.1 million in taxpayer-backed money apiece, to the very people who spent the past decade or so punching a hole in the fabric of the universe!

“‘We, uh, needed to keep these highly expert people in their seats,’ AIG spokeswoman Christina Pretto says to me in early February.

“‘But didn’t these ‘highly expert people’ basically destroy your company?’ I ask.

“Pretto protests, says this isn’t fair. The employees at AIGFP have already taken pay cuts, she says. Not retaining them would dilute the value of the company even further, make it harder to wrap up the unit’s operations in an orderly fashion. 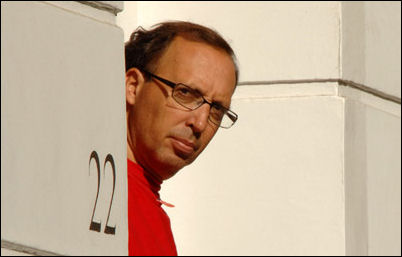 Joseph Cassano, former CFO of AIG’s Financial Products divison, said to be currently “hiding out in his lavish town house near Harrods in London.”

“The bonuses are a nice comic touch highlighting one of the more outrageous tangents of the bailout age, namely the fact that, even with the planet in flames, some members of the Wall Street class can’t even get used to the tragedy of having to fly coach. ”

These people need their trips to Baja, their spa treatments, their hand jobs,” says an official involved in the AIG bailout, a serious look on his face, apparently not even half-kidding. “They don’t function well without them.”

And I haven’t had my coffee or taken a shower yet.