In a 9.4.08 piece called “Beware of Bloom, I called Rian Johnson‘s forthcoming film (Summit, 5.29.09) “a sumptuous but impossibly silly and logic-free jape in the vein of…frankly, the movie it most reminded me of was the 1967 Casino Royale, which still reigns as one of the emptiest wank-off movies of the mid to late ’60s.

“It’s an elaborate, European-set con-artist movie that imparts none of the fun or the thrill of the game. I didn’t know what was going on half the time, and I stopped caring around the 45-minute mark.

“Rachel Weisz, as a rich mark named Penelope, is lovely and delightful to hang with — I’ll give her (and the movie) that. But Adrien Brody, as the conscience-wracked half of the Brothers Bloom (sick of being a con-man, wants a real life, etc.), is glum and doleful and enervated, and infuriating for that.

“Brody’s character’s last name is Bloom, as is his brother Stephen, who’s played by Mark Ruffalo…and yet Brody is repeatedly addressed as ‘Bloom’ and Ruffalo is called ‘Stephen.’ I fell in hate with the movie over this point alone.

“I hated the relentlessly sullen poseur crap delivered by Rinko Kikuchi, who plays an appendage named ‘Bang Bang.’ I wanted to see her knifed or shot or pushed into the ocean. All I could think when I watched Robbie Coltrane, who plays ‘the curator,’ was ‘my God, the man has to lose some weight!’ He’s really gone past the tipping point in terms of excess tonnage.

“I lasted a little less than an hour, and I was reeling from the preciousness, the overdone contintental cutesiness, the feeling of being simultaneously mauled, tickled, fucked with and drugged by the impossibly faux-Wes Anderson style of the damn thing.

“Rian obviously wants to be Wes, but this movie makes The Life Aquatic look like Yasujiro Ozu‘s Floating Weeds.

“Some will say that The Brothers Bloom is lush and stylistically mesmerizing and beautiful to bathe in, in the empty sense of that term. But this is the kind of movie that appeals to 30-something Entertainment Weekly or New York magazine feature writers who have no taste to speak of.

“It’s ravishingly composed and oh-so-poised with a sense of old-world European train-car romance (as it once existed 50 or 60 years ago) , and yet so stuck on its cleverness that I wanted to reach out and strangle the movie — pull it right off the screen, leap on top of it like a 350 pound wrestler and choke the life out of the damn thing.

“I counted at least 22 walkouts before I finally gave up. When I left two Toronto Film Festival volunteers said to me, ‘Is it over? There are so many people leaving!’ We all had a good laugh.” 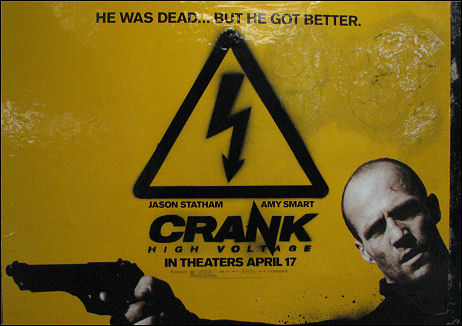 The copy line should read, “Died. Over That. Bring It On.” 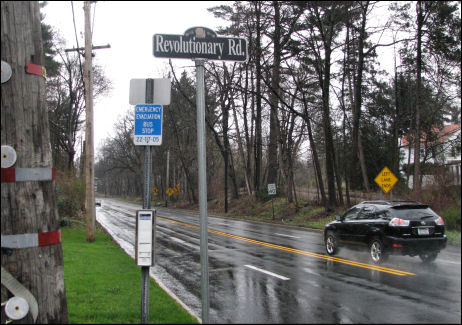 Somewhere north of Tarrytown, I forget where. 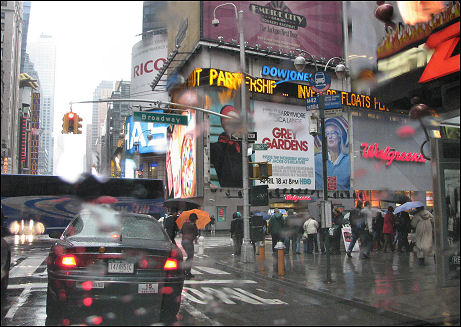 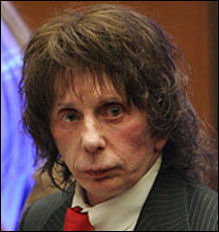 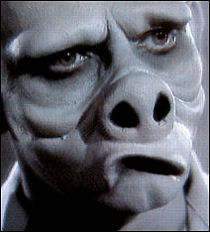 On top of my other dislikes and pet peeves, I need to add another one — i.e., the term “water dog.” Not the reason or history but the damn sound of it. What have dogs got to do with water apart from the fact that good owners given them warm baths every so often? Who has pleasant associations of dogs and wetness? The term sounds inane. What if someone decided to call a certain species an Arabian sand dog? Or a Lithuanian milk dog? Would that make any sense to anyone? 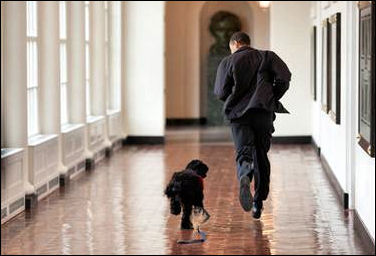 I recoiled the instant I heard the term. It made me think of a dog covered with water-filled tumors, and an image of the tumors bursting and spilling water all over the floor when you pick the dog up. Revolting. I’m not kidding or putting anyone on about this — I really don’t care or the sound of it. Obviously not the dogs themselves.

The death of Marilyn Chambers at age 56 is obviously suspect. Barring an accident or unlucky genes, healthy people don’t die in their mid ’50s unless they’ve hastened it along in some way. I’m just guessing, but I’ll bet anyone that Chambers’ lifestyle was in some way a factor. I’m referring, of course, to the people she hung with and the influences she encountered as a result of her porn-star career. The Mitchell Brothers, Linda Lovelace, John Holmes…who else? 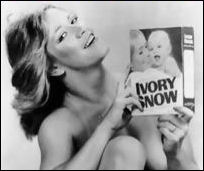 As Tyson director James Toback said in our interview last weekend, the constant celebration and looking back at the ’60s by boomer-age producers and filmmakers is a tacit admission that their lives were much better back then. Or a suspicion, at least, that on this or that level their lives felt better (apart from the fact that life tends to feel more sensually gratifying and spontaneously enjoyable when you’re 22 as opposed to 62.) Despite all the power and creature comforts that boomers have accumulated and come to enjoy over the last 35 or 40 years since, they were happier back then. And this realization won’t leave them alone, like a slight back itch. Which is why they keep revisiting it, or rather why it keeps revisiting them, like Charles Dicken‘s Ghost of Christmas past.

50 Comments
How They Happened

What are the best making-of docs ever included as DVD supplements? At the top of my list is Laurent Bouzereau‘s two-hour-long “making of Jaws” doc that was originally included on a Jaws special edition laser disc in the ’90s and re-appeared on the 30th anniversary DVD that came out in ’05. Second is Charles Lauzarika‘s Tricks of the Trade, an innovative 71-minute doc about the making of Ridley Scott‘s Matchstick Men, which was more or less inspired by Project Greenlight. The list could go on and on.

But here’s the real question: what major films that have come out on DVD need a first-rate, multi-chapter doc about their creation? I’ll tell you two right now — Woody Allen‘s Annie Hall and Manhattan. And one about Hal Ashby and Warren Beatty‘s Shampoo. And one about the calamitous making of the 1962 Mutiny on the Bounty.

“On behalf of everyone here at Movieline, welcome,” writes editor Seth Abramovitch on this, the first day of the new Movieline site. “Whether you come to us as a fan of the original magazine, a follower of our previous online efforts [on Defamer], or out of sheer curiosity after noticing our URL carved into a bathroom stall at one of L.A.’s mustier drinking establishments, we’re thrilled to have you here.”

Senior Editors are the Manhattan-based S.T. VanAirsdale and the Los Angeles-residing Kyle Buchanan. The Contributing Editors are Matt McCluskey and Julie Miller.

There is, of course, a Tony Scott movie in the pirate-kidnapping standoff that ended yesterday with Navy Seal snipers shooting three Somali pirates in the head (and one other pirate being captured) and thereby securing the freedom of freighter captain Richard Phillips. Or at least a fictional movie of some kind based on the misadventures of Somali pirates.

And I don’t mean some bullshit Raid on Entebbe thing like Menahem Golan would have greenlit 20 yuears ago. I mean a film with the first-rate chops of Black Hawk Down minus the grim downer vibe and a raw you-are-there quality. The material is certainly there. If I were a studio production chief I’d be hunting around right now for stories. Maybe there’s a City of God-type film to be made from the point-of-view of the pirates. That’s what my son Dylan suggested last weekend.

One, Grey’s statement that “the contract [said] I would be nude” seems ironic considering that Soderbergh doesn’t really go there. (At least in the print I saw at Sundance.) There’s certainly no “okay!” nude scene of any kind — that I’m sure of. Which is a bit like making a movie about Babe Ruth without showing him hitting homers in Yankee Stadium. But that’s Soderbergh for you. He’s not Bernardo Bertolucci and he never will be. I think it’s fair to say, in fact, that he’s somewhat averse to sensual show-and-tell. Or that he’s become that way, certainly, in the 20 years since sex, lies and videotape.

Last weekend’s visit to the original Bethel, N.Y. site of the Woodstock Music & Arts Fair led me to think about buying the 245-minute director’s cut DVD of Michael Wadleigh‘s Woodstock. This led me to Warner Home Video’s Bluray version of this cut, which will come out on June 9th. This same cut will open Roger Ebert‘s Overlooked Film Festival on 4.22. 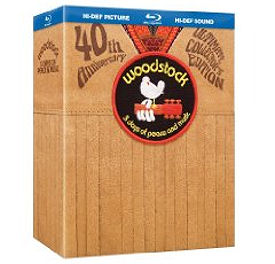 So between the possible Cannes showing of Ang Lee‘s Taking Woodstock next month, the Woodstock Blu-ray on June 9th, and the commercial release of Lee’s film on August 14th, the coming summer will definitely have a persistent Woodstock-nostalgia vibe.

Not to mention Michelle Esrick‘s Saint Misbehavin’, a doc about Woodstock star and onetime Merry Prankster Hugh Romney (a.k.a., Wavy Gravy) that….uhh, won’t be coming out this summer. The doc has played at the recent South by Southwest and the Full Frame Film Festival, but Ira Deutchman, who’s handling distribution, is wondering about competition from Lee’s film and thinking about waiting for the fall.

It seems to me that most people will be in the mood this summer to re-experience (or freshly experience) the old 1969 hippie-tribal vibe, but come Labor Day it’ll be on to other moods and discoveries.