A friend has written with a last-minute offer of a shared apartment in Cannes during the festival. It’s a two-bedroom place, open from May 10th to 24th, in Pointe Croisette, on the east side of the Croisette — about a 15-minute walk along the beach to the Palais. He’s asking $1750 (or half of what he’s paying) for a room with a king-sized bed that can be split into 2 singles. And he can send pics. I’m the go-between.

When all was said and done and the NRA aside, Charlton Heston was always a talented, confident and resourceful actor. He always brought it home; knew how to sell it. The non-verbal conviction be brought to this scene from The Big Country — those looks of intense resentment and lingering loyalty for his boss, played by the blustery Charles Bickford — are what make it work. They’re the emotional bedrock.

Should I, like, cancel my flight to Nice on May 11th (i.e., a week from next Monday) along with my participation in the Cannes Film Festival? Or should I just double-up on the alcoholic hand-wipes and hope for the best?

I know one thing. The travel-industry reps who are downplaying the swine-flu reports on the news shows are reminding me of Murray Hamilton, the mayor of Amity in Jaws, telling Roy Scheider to be careful about scaring away tourists with all this shark talk.

Can you imagine saying to anyone, publicly or privately, that you were “scarred for life, for a year” about anything at all? Isn’t this the same thing as saying, “I was shot and killed, wounded kinda badly”? It makes more sense to say you were “scarred for a year, for life” because this sounds like you’re building on the original thought — i.e., elaborating for effect. But to backpedal from a lifetime of scarring to a single year’s worth suggests, to me, a limited intellectual capacity. [Thanks to New York/Vulture for the original link to Perez Hilton.]

Apologies to Washington Times writer Sonny Bunch for my not responding to an interview request last week to talk about film grain. A decent piece resulted. He wound up quoting Some Came Running‘s Glenn Kenny and the Criterion Collection’s Lee Kline. Kline blows smoke, however, by saying the choice is strictly between removing or not removing film grain. He knows full well that film grain can be reduced tastefully and respectfully with picture detail not being compromised in any significant way.

MCN’s David Poland‘s has not only called Wolverine “a low-rent masterpiece,” but says it makes you “ready to sit through the next Origins.” But will Fox marketers feel too skittish about hyping “low rent,” which obviously suggests a cheesy quality?

Here‘s the portion of Poland’s review that it came from: “Is Wolverine the comic book equivalent of Hal Ashby and Waldo Salt‘s Coming Home with mutant powers? No. But versus last year’s second tier parade of high grossing action – Indy 4, Hulk Incredible, Mummy 3 and Jules Verne’s Center of the 3D – it looks like a low-rent masterpiece.

“It’s a B movie with 1000 effects shots, pure and simple. Gavin Hood made some good acting choices, moved the pieces around the board effectively, Don McAlpine lit the shit out of it, Harry Gregson-Williams hype scored it (not memorably, but loudly, as this material demands), and after 107 minutes, you are ready to sit through the next Origins, not expecting the world, but not unhappy to be there for the ride.

“What else, exactly, were you expecting?”

Big Hollywood’s Steve Mason, by the way, is predicting that Wolverine will pull down $92 million by Sunday night.

A 4.29 Ad Age story about the firing of Entertainment Weekly publisher Scott Donaton — the mag’s fifth publisher in five years at the time of his hiring in late ’07 — reports that parent company Time Inc. is saying that “the magazine will continue to publish, contradicting persistent rumors to the contrary, and that a successor [to Donaton] will be named shortly.”

What is the blockage over there? The dwindling ad income at EW isn’t enough to support the massive staffing and overhead costs….hello? At best revenues are going to drop even more and then, if things work out, they may stabilize down the road. But the salad days are over. That means you abandon the big offices, have most of the staffers work from home, and…whatever, bump up Jess Cagle‘s salary in exchange for a new title as publisher/managing editor. Don’t hire a new publisher at $250,000 a year — take the money and snag three or four new writers in order to add snappy content.

A friend says he began hearing a couple of years ago that EW might eventually be folded into People magazine. What a comedown if that happens! What a terrible environment to have to adapt to. I worked for People from ’96 to ’98, and it was a miserable environment even back then. I was happy to be getting paid and have a kind of berth to call home, but it was hellish all the same.

I used to work for EW in the early to mid ’90s. Loved what it was, loved the work. News ‘n’ Notes craziness! Working late on Tuesday nights, faxes back and forth, etc. Those were the days.

“Previously the editor-turned-publisher of Advertising Age, Donaton became EW’s fifth publisher in five years when he accepted the vacant job post 17 months ago,” Nat Ives writes. “He and Rick Tetzeli, then the managing editor, set about a redesign and re-articulation of the mission designed, among other things, to set EW apart from celebrity magazines. He also oversaw an overhaul of EW’s website, boosting the number of blogs, videos and the range of community tools. In January, EW named Jess Cagle to succeed Mr. Tetzeli as managing editor.

“But, unsurprisingly given a recession that has caused dramatic drop in many consumer magazines’ ad revenue, ad-page declines continued after the redesign. EW’s first-quarter ad pages this year came in 38% below their mark in the first quarter last year, according to the Publishers Information Bureau. They fell 20% in 2008, Mr. Donaton’s first year on the job, after falling 13% in 2007 and 8% in 2006. Paid and verified circulation in the second half of 2008 averaged 1.7 million copies, 1% lower than a year earlier, as paid subscriptions dipped almost 3%, EW reported to the Audit Bureau of Circulations.

“There were some signs of progress under Donaton and Cagle. Newsstand sales increased almost 7% to 50,437, on the back of the redesign and editorial retooling. And traffic to EW.com appears to have been increasing too, with Alexa recording a 45% increase in visitors in the past three months.”

Make your own list of the most moving film performances of all time — the ones that reach right in and melt you down, no matter how many times you’ve seen them — and I’ll bet serious cash that Gladys George‘s in The Best Years of Our Lives is not among them. I’ll bet, in fact, that right now most HE readers haven’t a clue who Gladys George was. But watch this clip from William Wyler‘s Oscar-winning film (or start, rather, at the 37-second mark and stay with it until 1:51) and you’ll never forget her.

This YouTube clip is a little too murky-looking to appreciate the subtlety in George’s acting, and the sound levels are weak. It’s better if you can catch it on DVD, or even on TCM. As long as it’s on a larger screen.

She manages her big score without saying a word. It’s all in the tightening of her features and the watering of her eyes as her character, Hortense Derry, listens to her broken-down alcoholic husband Pat (Roman Bohnen) read a citation for bravery given to his WWII-veteran son, Fred Derry (Dana Andrews), who’s been having a rough time finding his civilian footing.

And it’s all over in 74 seconds. And the emotion only kicks in during the last 45 seconds. But it’s a devastating scene. Both characters holding it in, the burning cigarette, the pint of booze, the empathy for a young guy dealt a tough hand, etc. Gets me every time.

George was born in 1900 and died in ’54, basically from complications from too much drinking and smoking. Her most memorable role besides this was as Miles Archer’s widow in The Maltese Falcon (i.e., who’d been fooling around with Humphrey Bogart behind her husband’s back). As far as I’m concerned she lives forever and very proudly because of this one moment, which is by far the most affecting in Wyler’s film. 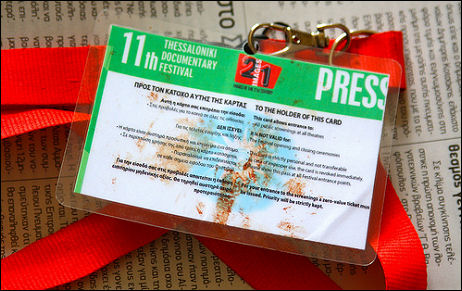