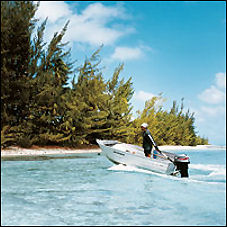 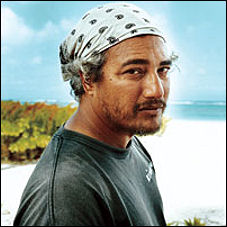 The article does, however, mention the ongoing development of the Brando, an “ecologically friendly” resort on the Brando-owned atoll of Tetiaroa, in the South Pacific. But the complex, according to Medavoy, is unlikely to open before 2012. It will include 40 or more bungalows designed with a “masculine quality,” according to developer Ramez Toubassy , and will cost between $50 million and $100 million after all is said and done.

If you know anything about construction an estimate of $50 to $100 million will ultimately cost at least $150 million if not $175 million. Just watch Mr. Blandings Builds His Dream House.

At least Cieply’s article reminded me of a fascinating Maxim piece about Tetiora by Julian Sancton, who normally presides over the daily postings at vanityfair.com. Called “Last Tango on Brando Island,” it was researched last summer and appeared sometime last fall. Here’s a taste:

“Overrun with tropical weeds, the airstrip on Tetiaroa — Marlon Brando’s private island in the South Pacific — is barely detectable from the sky. It was shut down in 2004, the year the actor died. Now it can only accommodate a helicopter. From above, the atoll, which consists of 13 white-sand islets encircled by a coral reef, shimmers like a turquoise amulet. Once the retreat of Tahitian royalty, it became the island kingdom of one of the 20th century’s most enigmatic figures.

“On the ground a Polynesian man dressed like an L.A. gangbanger waits for us to land. He is sitting in a wheelbarrow, a peculiar but fitting throne for the new king of Tetiaroa. At 45, Teihotu Brando, Marlon’s third-born son, has his father’s noble profile and a hint of his generous waistline. Teihotu lives on the remote island alone with his wife and the youngest of their three children, surviving on the fish he spears, the fruit he picks, and whatever pro¬≠visions his occasional visitors can bring from Tahiti, 30 miles away.”

And while we’re at it, here’s a fascinating recent column by Variety‘s Todd McCarthy about a visit to Easter Island and Tahiti, and featuring a discussion with longtime local journalist Alex du Prel.

“A fabulous character who might have walked out of the pages of Graham Greene,” McCarthy writes, “du Prel arrived in Tahiti 35 years ago, after having sailed solo from his native Virgin Islands through the Panama Canal to Hawaii, then on to Tahiti, where he lives high up in the mountains of Moorea.

“Du Prel has seen it all. Arriving as the post-Bounty enthusiasm for the islands peaked and with experience developing resorts in the Caribbean, he worked for Brando, trying to guide him in properly nurturing his private island before quitting in exasperation.

“While running the Bora Bora Lodge, he became very close to, and fond of, David Lean and Robert Bolt during the six months they spent there plotting their unrealized Bounty double feature. 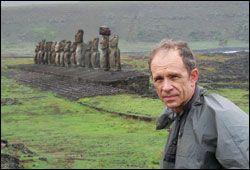 “He then dealt, successively, with Roman Polanski, Dino De Laurentiis and Jan Troell during the shooting of Hurricane (he was even given a speaking role as a villainous American naval officer).

“When Mel Gibson and Anthony Hopkins came to Moorea to shoot The Bounty in the early ’80s, the ceremonial sequences were practically shot in du Prel’s front yard.

“In each case, du Prel — while gazing over Cook’s Bay, named after the great English navigator who became the first white man to visit the island 235 years ago — recalled that these productions had a gigantic effect on their locales, at first for the good, long term perhaps not so much.”