Vague spoiler in third paragraph on this article…beware!: For the last several days I’ve been grappling with one of the roughest cases of movie-contemplation blockage I’ve ever dealt with, and over a film I mostly liked and admired when I first saw it at Sundance ’08. The film is Rupert Wyatt‘s The Escapist, which opened yesterday at Manhattan’s Village East and will open next Friday (4.10) at Laemmle’s Sunset 5. And I’ve only just figured out why I haven’t been able to write anything about it despite five or six tries. 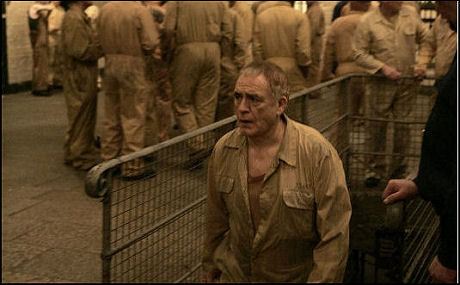 Brian Cox in The Escapist.

There’s no denying that The Escapist is a prison-break film cut from fresh cloth. On top of being dramatically pungent and atmospherically ripe, the story it tells is nothing if not original (or at least atypical). It uses a flashback/flash-forward editing scheme that I felt was diverting enough. And despite adhering to a conventional tale of a small group of convicts planning and executing a complex escape from a tough jail, it all boils down in the end to being a father-daughter love story — the father played by the great Brian Cox and the daughter…leave it alone.

The bottom line is that The Escapist bears a slight similarity to Occurence at Owl Creek Bridge , and after catching it a second time last week at home — seeing it cold as it were, as opposed to seeing it under enthusiastic communal conditions at Park City’s Eccles theatre some 14 months ago, with everyone in that huge theatre spellbound and into each and every twist and turn — I began to feel a bit differently about the finale.

I still valued the refined moves and unusual calibration and certainly the tough, lived-in performances — Cox’s first and foremost but also those from Joseph Fiennes, Dominic Cooper, Liam Cunningham, Seu Jorge, Damian Lewis and Steven Mackintosh . But I found myself longing for the elation of a purely successful escape even more this time around, and I had a slightly more difficult reaction to where the film left me.

Prison-break movies (or plots about same) are metaphors, of course, for an escape that we all desire and dream about, which is release from the prison of our bodies, our pasts, our genes, our debts, our mistakes, our long-buried fears. I take this idea-fantasy very seriously. I’ve watched Escape From Alcatraz ten times if I’ve watched it once, and I don’t care if Clint and the gang were never found after they paddled away — the point is that they made it out, and that you could feel the euphoric release after the last barrier had been scaled or tunnelled through. 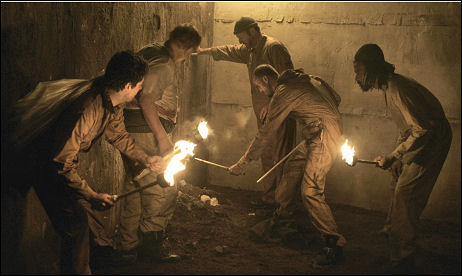 I’m just saying that if you’re going to invite the audience to become an accomplice on a very complex escape attempt, you’d do well to respect what most people want and need out of this.

I spoke to Escapist director Rupert Wyatt on the phone last week after notifying everyone I was unable to meet him at a restaurant as planned. But he was on a cell phone (somewhere in the Chelsea distrcit) and the reception was in and out so I decided not to use it.

Please don’t let my personal feelings about one aspect of The Escapist cast a shadow upon Wyatt’s directing chops. He’s audacious-minded and yet he knows his way around traditional moods and genres and shooting styles. I’m looking forward to his next film (according to Coming Soon’s Ed Douglas) — an adaptation of Sebastian Faulks‘ “Birdsong” which will costar Hunger‘s Michael Fassbender and Paddy Considine. There may also be a heist movie about stealing the Mona Lisa, to be made with his Escapist partner-producer Alan Maloney.