News of the World‘s Mazher Mahmood reported today about a sting operation involving an “undercover fake sheik” that successfully hoodwinked the father of nine-year-old Slumdog Millionaire costar Rubiana Ali into offering his daughter for sale. Believing that the bogus sheik was willing to pay big-time, the dad, identified as Rafiq Qureshi in the story, reportedly offered to sell Rubiana for 200,000 quid. 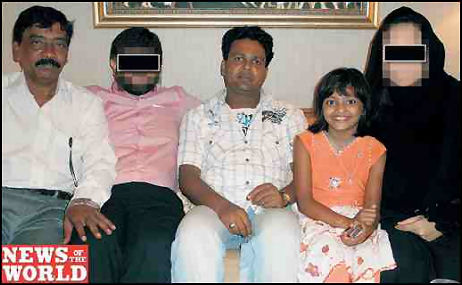 Nobody does icky like the British tabs, although it seems as if the the story might be legit. Rafiq “revealed his scheme to undercover News of the World reporters posing as a wealthy family from Dubai,” it says. “As he offered the deal, Rafiq reportedly declared “I have to consider what’s best for me, my family and Rubina’s future.”

The aroma of this story aside, it’s presumably understood that child-selling has been practiced in poor cultures for centuries. And it’s been depicted in two films without any implication that only scumbags would do such a thing. In an early portion of Nicholas Ray‘s King of Kings a tradesman, needing a helper, offers to buy the 12 year-old Jesus of Nazareth. In Federico Fellini‘s La Strada the story begins with Anthony Quinn ‘s Zampano, also needing an assistant, buying Guilietta Messina ‘s Gelsomina from her mother.