The rationale for doing awful things in order to defeat or weaken your enemy was articulated 44 years ago by Cyril Cusack in The Spy Who Came In From The Cold, to wit: “Our work, as I understand it, is based on a single assumption that the West is never going to be the aggressor. We may do disagreeable things but we’re defensive. Our policies are peaceful. But our methods can’t afford to be less ruthless than those of the opposition…can they? 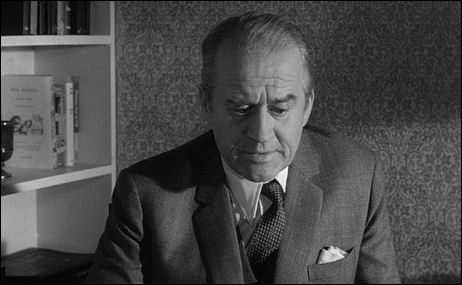 Cyril Cusack as “Control” in Martin Ritt’s The Spy Who Came In From The Cold.

“You know, I’d say, uhm…since the war, our methods — our techniques, that is — and those of the [opposition] have become very much the same. Yes. I mean, occasionally…we have to do wicked things. Very wicked things indeed. But, uh, you can’t be less wicked than your enemies simply because your government’s policy is benevolent. Can you?”

This, essentially, is the right-wing Fox News view of the torture issue. It sounds moderate and reasonable when expressed by Cusack, but crude and boorish and repellent out of the mouth of Sean Hannity.