“It used to be Diane Keaton with me — she always used to tell me, ‘I’m terrible, I’m awful, I can’t do it, you should get someone else.’ And she was always brilliant. Well, Larry is like this,” said Woody Allen via telephone from his Upper East Side apartment last week. The 73-year-old director was discussing his new movie Whatever Works, which stars Larry David, and will open the Tribeca Film Festival on April 22 before hitting theaters in June. 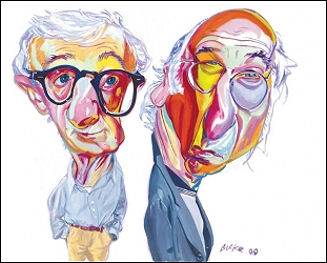 “I’d always been a fan…I asked him to do it, and he said, ‘But I can’t act! I can only do what I do, I’m not an actor, you’ll be disappointed,'” said Mr. Allen. “You know, those are the ones who can always do it. The ones that tell you how great they are can never do it. Larry is all, ‘I can’t do it. I can’t do it,’ but when it came time to do it, right out of the box, he did it. And not just the comedy, which I expected, but all the other things he had to do which required acting and emotions and being touching and all that — he did that, too.” — from “The Unshine Boys,” a Sarah Vilkomerson article in the New York Observer that was posted last night at 6 pm..