A DVD of Fritz Lang‘s Manhunt (1941), a classic World War II-era chase thriller, will emerge in remastered form on May 12th from Fox Home Video. 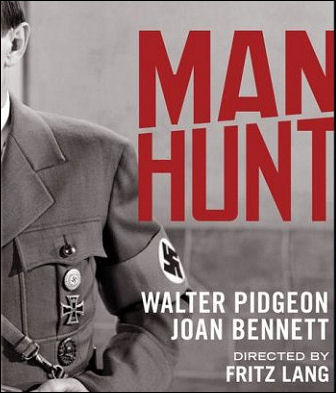 Manhunt was one of my favorite late-night TV movies when I was in my early to mid teens. But it hasn’t been aired in a long time and has never before been released on DVD or VHS.

Based on Geoffrey Household‘s “Rogue Male,” it’s about a gentleman hunter named Thorndike (Walter Pidgeon) who manages to penetrate Adolf Hitler‘s Berchtesgaden headquarters as a kind of hunting exercise, not to kill Hitler but to prove to himself that he was able to get him in his sights. I remember the close-up of Pidgeon’s trigger finger — pausing, hesitating.

Then the story kicks in. Pidgeon/Thorndike is discovered by German security, thrown off a cliff, survives, is tracked down by soldiers and hounds but manages to escape, makes his way to London with German agents still on his trail, meets an emotionally vulnerable streetwalker (Joan Bennett) who wears a little metal arrow in her beret. She falls for Thorndike, takes him in, pays the price.

It’s been decades since I’ve seen it but the principal baddie is played by George Sanders; John Carradine plays another ne’er do well. I especially recall the ending with Pidgeon hiding in a cave and Sanders talking to him from outside, trying to coax him out, and the manner in which the little arrow from Bennett’s beret resolves things. 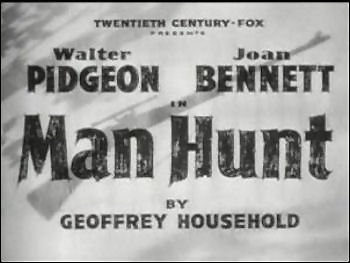 It doesn’t work for me to call it Man Hunt — it has to be a one-word title.

As with all older action films the pace is slowish and deliberate. But old-fashionedness is what the enjoyment of a film like Manhunt is all about.

This data chart says that Manhunt was shot in March 1941 and was out in theatres three months later. This was more or less standard procedure back then.

One of the features on the disc is a restoration comparison. That’s always a closer for me. Shawn Belston‘s Fox Home Video team is highly respected. I’ve only seen Man Hunt on a primitive black-and-white TV with commercials every 10 minutes.

Sanders was repeatedly cast as villains because of that snide and effete manner that he did so well. But what about those of us who enjoy Sanders’ haughty airs? I loved his disreputable cad in Rebecca and the way he oozed out his insinuations. In any event mix his effeteness with good-guyness and you’ve got one of Sanders’ most winning roles ever — the adventurous journalist friend of Joel McCrea in Foreign Correspondent. And he was charming also (as well as perfect) as Addison DeWitt in All About Eve.